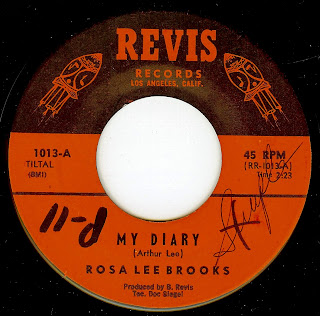 This record has been a holy grail of sorts for me since, oh, around 1990 when I first read about it in the book Jimi Hendrix: Electric Gypsy. In those days, of course, there was no internet so the possibilities of being able to hear this incredibly scarce record were close to impossible! Luckily, some time in the mid '90's I finally got to hear it, on a 5th or so generation cassette copy with tape hiss as loud as the music! Both sides lived up to and in fact, surpassed my expectations. It's a great record.

There are conflicting stories about authorship of "My Diary" (Arthur Lee is credited on the record, while Rosa Lee insists that she and Hendrix wrote the song) and also the year of recording (Rosa Lee claims 1964). The most likely story is that, in early 1965, young "Jimmy" Hendrix was on tour with Little Richard & The Upsetters when he decided to go AWOL in Los Angeles. Hendrix is said to have met Rosa Lee Brooks while they were both in the crowd at an Ike & Tina Turner show, and that night marked the beginning of a fleeting romance that lasted until Jimmy headed back to New York City. Rosa Lee knew Billy Revis, head of a small studio/ record label, who she and Hendrix persuaded to cut the single. Legend has it that when Rosa Lee picked up Arthur Lee to go to the recording session, Hendrix immediately became jealous and the situation became tense (the two reconnected a few years later without rivalry). Arthur's backing vocal is clearly heard on the record, and Hendrix lays down some of the greatest guitar work of his entire life on this track. The flip side, "Utee" was written in the studio and features a red hot Hendrix break. The record was announced in the Billboard Magazine in June of 1965, but other than a few rumblings in L.A, never went anywhere. Within a few months, Arthur Lee formed the group that, by the fall of 1965, became Love. Hendrix struggled along in New York for another year and some months until fate brought him into the lap of Animals bassist Chas Chandler, who took him to London and helped make him a star. Rosa Lee Brooks has kept on singing, but this seems to be her only release. And what a release it is! (note: both sides were issued on the excellent Hendrix box set West Coast Seattle Boy a few years back, but it doesn't diminish the thrill of owning and sharing the actual 45 one bit).

A pair of winning ACES!
Excellent stuff. Wish I could dance.....

On The Flip-Side said...

Holy potatoes. Don't even wanna know how much you dropped on that bad boy (girl?)!