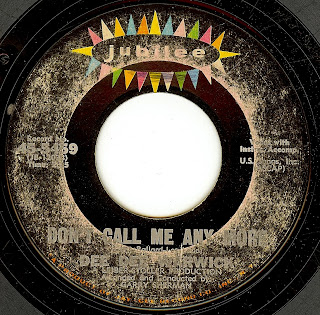 The story of Dee Dee Warwick is a tale with many musical highs and too many personal lows (she died about 5 years ago after battling drug addiction for most of her life). Dee Dee and her sister Dionne were discovered in the late '50's as a gospel singing duo, and along with Doris Troy became THE A-list, first called female vocalists for countless studio sessions (sadly, Dee Dee never scored the bigs hits on her own that her talent deserved). While Dionne had the smooth voice, Dee Dee could wail with the best of them, as is heard on this incredible two-sider; her debut release.

"Don't Call Me Any More" is a masterpiece of musical drama, and when Dee Dee belts out those title lyrics, it's straight from the gut. The bridge section is also one of the first American recordings that incorporates ska rhythms.