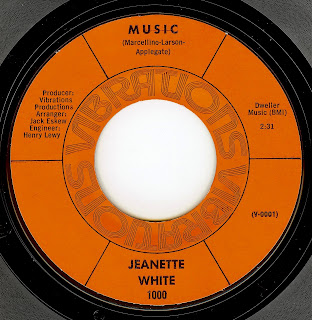 An absolute BLOWOUT of a record, and seemingly the only release by Jeanette White.

The intro to this record lays out the thick fuzz tone guitar and some taps from the drummer (which immediately establishes its cool factor), only to explode in a stomping four-on-the-floor belter when the drums kick in and Jeanette begins her celebration of all things music (specifically soul) while the record just keeps building up steam like an out of control locomotive.

Being as Los Angeles musician/ producer/ arranger Jack Eskew is listed as the arranger (and it was also reissued on LA based A&M records) I think it's safe to say this is an L.A record. Also, the west coast delta matrix number in the dead wax puts the pressing date as July 1969.

And this wasn't a #1 hit why? Damn I know life ain't fair but really? This is just too smokin'
Thanks D

Last four posts - all killer. You're on fire at the moment :)