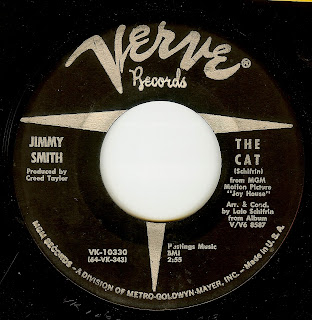 This is one that I thought I featured in the first year of the blog, but an email from a reader asking about it made me look back in the archives and I noticed it's never been posted! This definitely needed to be rectified, as this record is truly the pitome of the type of jazz sounds that were adopted as the soundtrack to the original mod movement in early sixties England, and a hell of a swinging record to boot!

Jimmy Smith was truly the king of the jazz organ; a pianist since he was a child, in his early 20's (c1953) Jimmy purchased a Hammond B3 organ, rented a warehouse space to practice and emerged a full year later with his whole new thing perfected. What a story, right?

Admittedly, my interest in jazz runs shallow ( I *am* a 45 fanatic afterall, and long improvisation doesn't bode well at 3 minutes per side) but the way Smith always made his music move and groove makes him stand out as someone I can truly dig.

One of the best 'mod jazz' tunes of all time!

I was lucky to catch Jimmy Smith about 10 years ago at Bimbo's. Such an incredible player!

Yay! I am a huge jazz fan, but frequently wish that pre mid fifties jazz thinking vis a vis releasing jazz singles still had some foothold. A good song is a good song, length of a solo notwithstanding!