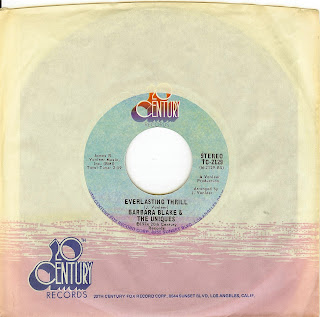 Barbara Blake was one of the "duet" singers in Chicago girl group The Du-ettes, who cut the incredible "Please Forgive Me", among other gems between '63-'65.

After the Du-ettes spilt in 1965, Barbara disappeared from the music business until she reappeared in 1970 as part of another group- Barbara & The Uniques. This trio consisted of Barbara, her sister Gwen and Doris Lindsey. They cut the minor hit "There It Goes Again"- a record which I thought I'd featured here a few years back, but never did (look for it in the future).

By 1974, all that remained was Barbara. On this scorching track she is backed by session vocalists. Sadly, Barabara cut one final record after this one and left the music business completely; a very talented singer who never got what she deserved in the way of commercial success.

Incredible in every way!