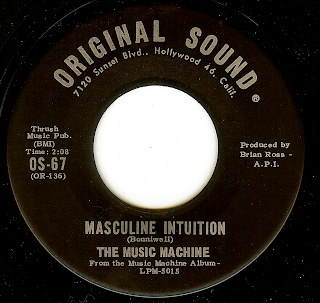 Greetings from Sopron, Hungary! I'm back on the road, so if posts become irregular, it's beyond my control.

This follow-up to their big hit "Talk Talk" sounds just as fine to my ears- and that's mighty fine indeed! Techincally, the other side ("The People In Me") was the a-side, but I find this hard driver to be *THE* side.

Music Machine leader Sean Bonniwell got his start as guitarist in the collegiate pop-folk band the Wayfarers, but the call of beat music pulled him away; by 1965, the embryo of the Music Machine (first called The Ragamuffins) was formed. The group cut a menacing figure with all black clothing, one black glove each and a groundbreaking HEAVY sound achieved my tuning their guitars down a third lower than standard tuning, something which is typically attributed to Black Sabbath but the Music Machine did it first.

Never heard this one before. graet tune!