THE CARTER BROTHERS - I DON'T CARE 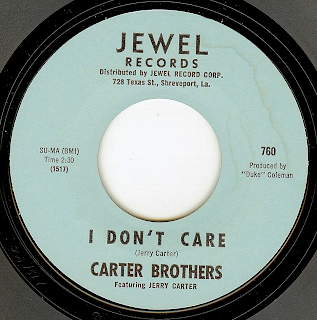 This is the type of record that I find most difficult to write about; I don't know much biographical info on the group, and the fact that it's a sweaty, smoky, lowdown, booty shaking r&b jam doesn't allow much in the way of descriptive writing (or perhaps it just DID and that's all I need to say).

Albert, Jerry & Roman Carter, from Garland, Alabama, cut this record in Shreveport, LA with Jewel Records owner Duke Coleman. The group recorded a small handful of other singles before the group ended in '67, allegedly because Albert & Jerry were drafted. Roman Carter continued on as a blues performer, and as far as I know nothing has been heard collectively from the Carter Brothers since.

THE CARTER BROTHERS - I DON'T CARE

Unfortunately, Albert Carter passed away recently (26 march 2012). Although, the three brothers were from Alabama and their music was rightly branded as Southern blues, they were living in California. The Carters have reorded quite extensively in the 60's and Roman, Jerry and Albert reunited briefly some years ago, recording two excellent CDs (Singing the blues and Coming back singing the blues. All their records are worthwhile

Derek, always fun to see you features songs connected to my hometown of Shreveport, Louisiana.

Stan Lewis actually owned Jewel Records. I also suspect this was not recorded in Shreveport. Stan frequently used studios in other cities and sometimes licensed material previously released on other labels.

In fact, the standard discography (Fancourt & Mc Grath)states that all the Carter Brothers sessions were recorded in Los Angeles where they were living.