ERIC AND THE VIKINGS - VIBRATIONS 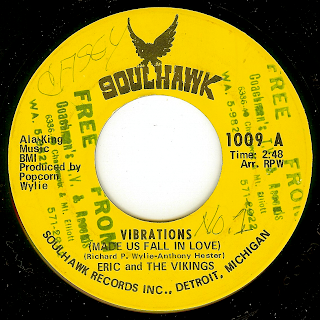 Hailing from Detroit, this was the debut single from Eric & The Vikings; the song was a HUGE hit in Detroit, which allowed producer Popcorn Wylie to sign them to Motown for a few excellent singles. The record is another fantastic example of the early 70's group harmony revival, capped off with an incredibly smooth lead vocal from Eric McClinton.

ERIC AND THE VIKINGS - VIBRATIONS