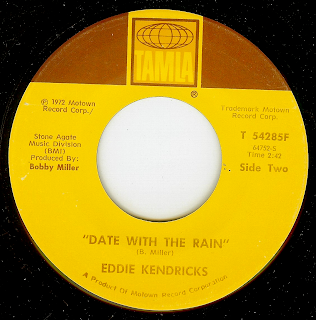 Songwriter/ producer Bobby Miller created one of Motown's greatest, dreamiest records here with former Temptation Eddie Kendricks; this song has taken on mythic proportions over the years, and it's strange to think that it languished as a b-side on a non-hit single upon its original release.

Every element, every instrument and Eddie's vocal are the stuff of musical perfection here; Bobby Miller applied the same type of magic to (most notably) the "comeback" era of The Dells, culminating with the tracks and singles which became the "There Is" LP- one of the finest soul LP's ever released.

One of my faves.

Out In The Street said...

Agreed with Funky16Corners on that.