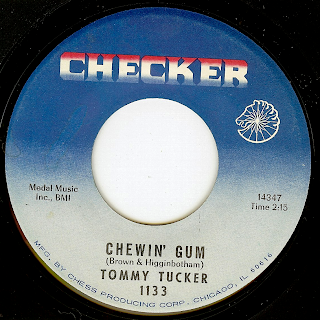 Why is it that the mindless music of the good old days is so much better than today's mindless drivel? Because it was and remains a STONE GROOVE, that's why.

Over some ultra funky Hammond organ and a tambourine that directly instructs your ass to SHAKE, Tommy Tucker (of "High Heeled Sneakers" fame) more or less invents bubblegum music on this track that packs the type of wallop that, for example, some twit repeating he has moves like Jagger (no you don't, mate) or some plastic surgery laden pseudo-hipster rattling on about video games simply DO NOT have.I regret to inform you folks that if you've got soul, it ain't showing.

Of course this track doesn't have the depth of some of the more serious r&b, but I love it just the same. And since you're here, I imagine you will as well.

Excellent tune..thanks! I'm ashamed to say High Heeled Sneakers is the only track I know by Tommy Tucker. I'll have to check out more of his stuff. Totally agree about the general crapness of most new pop music too..