THE DIRTY WURDS - WHY b/w TAKIN' MY BLUES AWAY 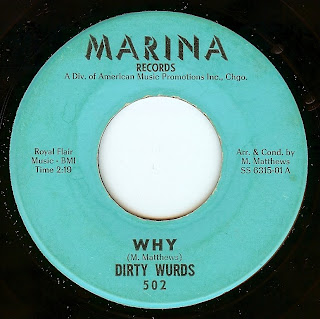 This is a record that I never thought I would actually own; both because it's insanely rare (and on the want list of practically every garage/ psych collector) and because I simply don't dig as deep into garage 45 collecting as I do soul and British invasion.

However, this record has been kicking me square in the pants since I first heard it on Pebbles Volume 5 back in the summer of 1992. I had just gotten the first 7 volumes of Pebbles, taped them all and used to drive around blasting them in my 1980 Mustang. Talk about teenage freedom!

This record inspires people to do outrageous things to acquire it; in my case, I saw it come up on ebay and felt that it was "the time". I put a nice old vintage Gibson amp on craigslist to secure the funds, it sold quickly and I was READY. There's another legendary story about a couple of friends of mine that, over breakfast one morning, made a trade- a copy of this record for a 1963 Vespa! Granted, the Vespa needed lots of work but STILL; that's a trade of epic proportions!

Here we are four paragraphs in and I haven't said much about the record. The Dirty Wurds were a teenage band from Chicago (age 16-17) who cut their teeth together playing bluegrass (!) then went in the beat direction. According to the liner notes from Pebbles, they would regularly open for national acts and practically cause riots! Not surprising, as this song is probably the earliest, nastiest nascent punk record.

The b-side is a pretty good bluesy workout too (with an excellent guitar break).
from 1966...

Man this is insane! I can't believe I've neever heard this one before. Derek thank you so much. This Blog is crazy...

Justin Pomeroy of the Dirty Wurds is from my neighborhood in Chicago. (His sister Deb was the drummer for the Daughters of Eve!)

We live just down the street from the church where Reverend Pomeroy worked for decades.

Derek, like you I first heard this group and song on the Pebbles Vol. 5 collection. However, there is something special, imagined or not, about hearing it ripped from the original 45.
Man, I would have loved to hear these guys on a double bill with the Monks. Just a random thought upon hearing this again. Thank you!

thanks Jem. I will also toot my own horn and say my transfers have better fidelity than the Pebbles comps!

OMG, Derek, this very song was covered by the late Paula Pierce and the Pandoras! Just as raw: early reviewers praised her voice as being imperceptible as to whether male or female. If you want my take on them with a lot of photos, go to the last "page" of my website http://www.heatherharris.net

Derek,
After completing a comparative listening of the sound quality between the two sources, I must say that you are indeed correct to toot your own horn in this case.

yes , pleeeeease do post the Dirty Wurds' fip side!

hugh thanks for you great work; I follow our site on a nearly every day basis

This is a great cut. I'd love to hear the B-Side. Keep up the great work! -greenlantern23

The bandwidth of this song is maxing out! I love this garage single! Thanks,it's nuts!

Hello Derek, hell yeah man, could you send me the flip side?

Great song that I also heard first via Greg Shaw's questionable audio quality offering on Pebbles. Now that said. A Gibson amp? A '63 Vespa? Hmmm, I'm an epic record collector, but I also love my Vespa and Gibson amp enough to not make that trade.

I'm listening to this right now on Pebbles #5 - I can see why it's so popular. The lead singer's right on the edge of just shouting, and he sounds as if he's really ticked off. Doubt if he needed a microphone.

I grew up with Justin. Do you know where he is now? bob berglund