AL REED - SORRY ABOUT THAT 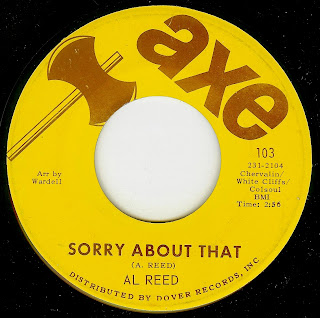 New Orleans singer Al Reed began releasing records in the mid-50's, but he wasn't very prolific- it looks as though he had only eight 45's released between 1955-1968 (including one as Diablo, and two as part of a duo, Ruth And Al). I would imagine that Al was one of the many performers making a living in the clubs in and out of NOLA, who had the occasional opportunity to cut a record (this time arranged by NOLA legend Wardell Quezergue).

This record has been a favorite of mine for many years, and the superb lyrics are delivered with a whole lot of believability by Al on the record. We've all either said or WANTED to say what Al lays out here, and he says it in a way that means BUSINESS.

AL REED - SORRY ABOUT THAT