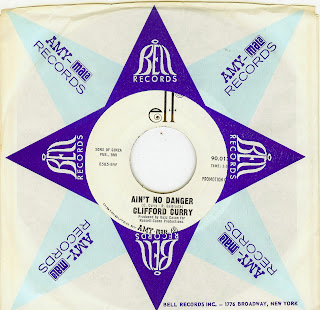 Often times a chart position only tells part of the story when it comes to a records impact; case in point, Clifford Curry's "She Shot A Hole In My Soul". While that record only reached the lower end of the Top 100, its impact was felt deeply on the Beach Music scene of the south eastern seaboard, and Clifford Curry has been a popular live attraction of that scene (and beyond) since the release of the record in 1967.

Clifford Curry's roots stretch back even further, as he began in doo wop groups while still in high school in Tennessee in the early 1950's, making his recorded debut in 1953.

As for today's entry, "Ain't No Danger" is a stomper of the highest order, matches Clifford's rich baritone with some unbelievably cool backing vocals and a groove that cuts SO DEEP it's practically underground.