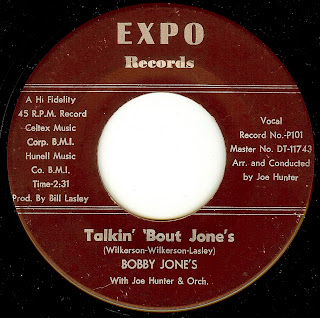 Louisiana native Bobby Jones (who grew up in a farming family) moved to Chicago as a young man in 1959. While working in a steel mill and singing through the day, co-workers encouraged him to pursue a career in music and he began singing in clubs and winning talent shows, and his recording sessions began in '61.

Bobby moved between several labels (including Vee Jay) but he never found a hit, although he released several really great singles. Today's entry is a fantastic boastful number with an excellent vocal from Bobby.

Bobby has continued performing live and recording music, and eventually in the early '80's Bobby began spelling his last name "Jonz" to avoid confusion with a gospel singer of the same name.