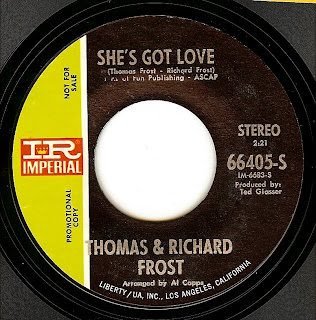 My advance apologies if this song gets stuck in your head ALL DAY and you just wanna play it over and over again. I certainly do!

My lady Angeline & I had the pleasure of meeting Richard Frost the other night and we had a great time talking about what it was like to be a mod in the bay area in the mid '60's. Unlike virtually every other US city, San Francisco didn't have much of a rock n roll scene before the hippie invasion (with the exception of the Beau Brummels, one of my ten favorite rock n roll bands of all time). However, heading south down the peninsula and into San Jose it was another matter, where bands like the Art Collection (who evolved into Powder and featured the Frost brothers) and The Chocolate Watchband were playing incredible British inspired R&B/ psych.

Cutting forward a few years to the late '60's, The Frost brothers relocated to Los Angeles, became part of Sonny & Cher's backing group and cut some records of their own. This single was a minor hit, but it should have been massive. Superb songwriting, a fantastic arrangement, and those excellent brotherly harmonies.

And, seriously, thank you for giving my a present (almost) every day of the year.

you are very welcome! My pleasure :-)

Well Tom, I thought it sounded better in mono.