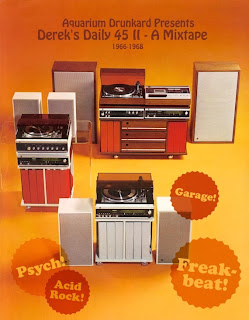 Aquarium Drunkard is one of the greatest music blogs out there, and I'm pleased as punch to have put together another downloadable "mixtape" for the site. This time, it's all on the psychedelic-garage-freakbeat tip, and it's guaranteed to light up your next party and cause you to get a speeding ticket if you listen to it in the car.

Check it out HERE

October is the end of the road for Daily 45 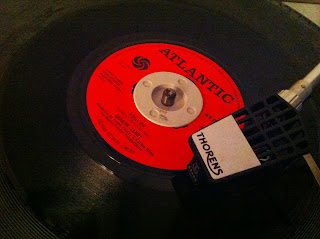 I started The Daily 45 six years ago (I think it was April of 2007), and over those six years I've featured nearly 2000 45's. It's given me great pleasure to share these sounds with you, and I've made many friends around the world through it, and even connected with some of the artists, songwriters, musicians, and producers of the music who reached out because they were so pleased that someone still enjoyed what they did all those years ago. Very soul satisfying, if I do say so myself!

While there are still a few elusive 45's that are still on my want list (which I'll post up either here or on my youtube page as they come into my collection), I can say that I've featured practically everything I wanna share at this point. Sure, there's hundreds of great singles that have never been featured here, but those are high-profile releases that just about everybody knows anyhow because of their popularity and staying power; I've always steered clear of featuring those.

SO, for the month of October, I'm gonna highlight some of the big ones; namely, my all time favorite 45's, and also post up some artist profiles that will feature several favorite sides from them in one post.

I'd also love to hear from YOU! What are some of your favorites that have been featured? Tell me who you are and where you are, 'cause I'd love to share your words as well.

Although it's not QUITE goodbye at this time, I would like to thank each and every person who has written to thank me for doing this; your words helped me keep on, practically every day, for these last six years. It's been a helluva ride!

Here's some ways to keep in touch: