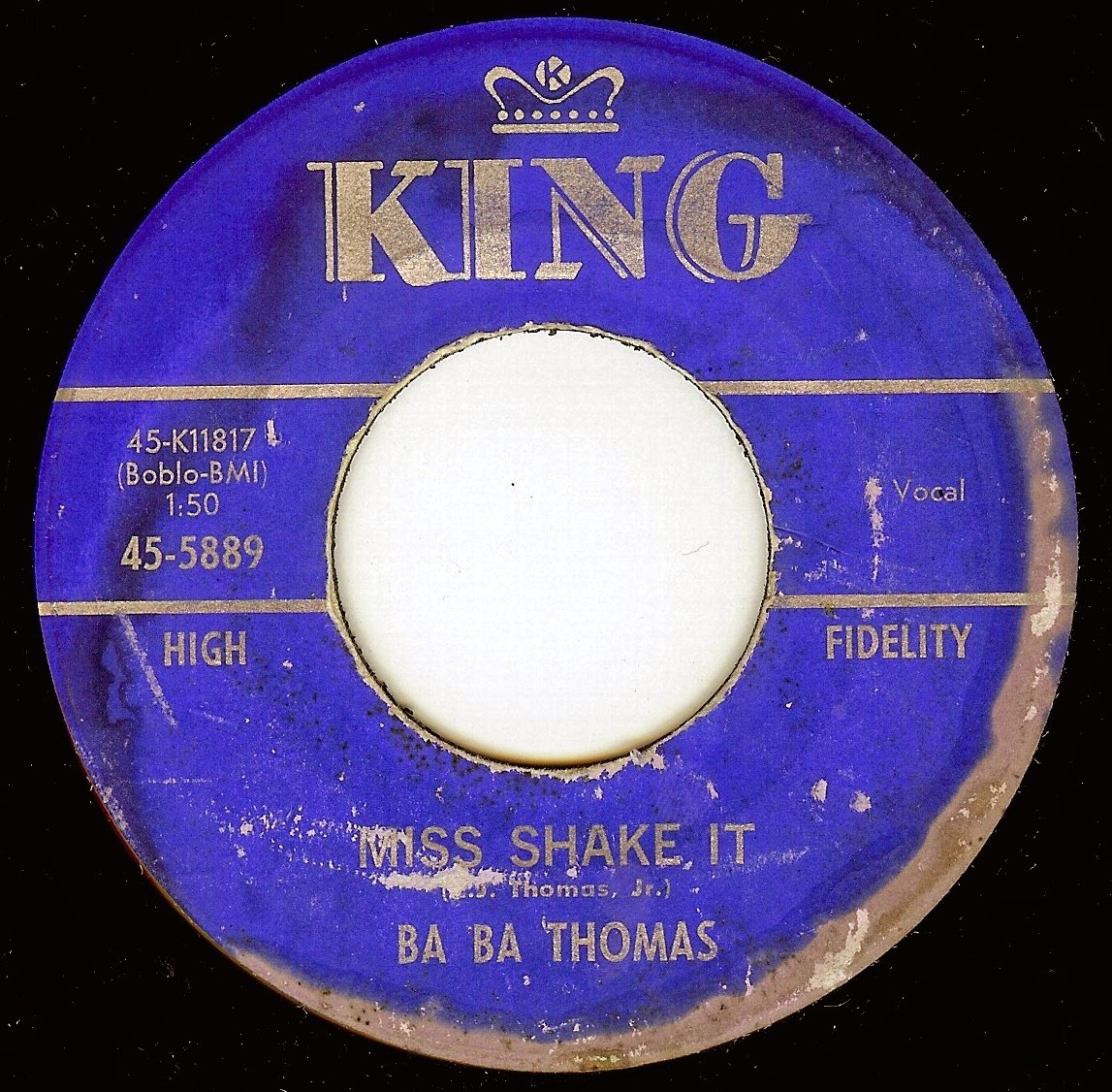 I haven't a clue who Ba Ba Thomas is (there are 2 45's on King records from this mysterious figure), but it sure is a convincing imitation of a style that Little Richard had given up (and not yet come back to), and was also a complete anachronism at the time of its release in 1964. However, a wild slab of pure adrenalized rock n roll/ R&B never goes out of style, so I'm proud to present to you the excellent sounds of 'Miss Shake It'. Use this stuff with caution; it's lethal! 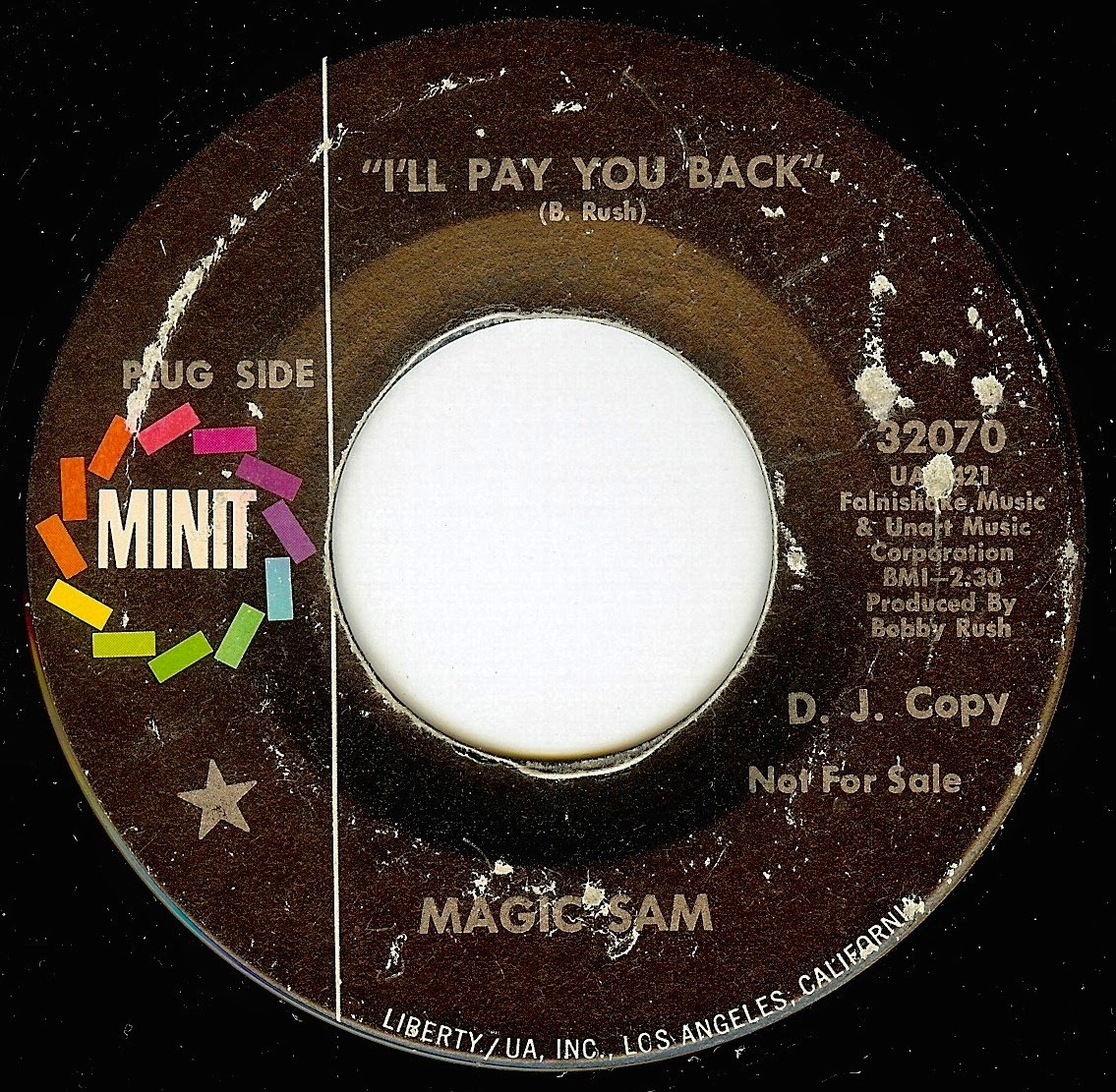 Magic Sam. Two words that send a chill up my spine...

Sam Maghett was a master of the electric guitar, born in Mississippi and transplanted to Chicago at a young age). As Sam was born in 1937 and a bit younger than the others on the electrified Chicago scene of the fifties and sixties, he took the blues into a whole new bag by incorporating not only the influence of soul but some rockabilly as well (check out his genius track '21 Days In Jail' from 1958). Sam's 1967 LP on Delmark, West Side Soul, is easily among the top ten blues LP's ever cut to wax, and in many ways may be my personal favorite.

On this side, fellow new breed Chicago bluesman Bobby Rush is credited as songwriter and producer. I'm not gonna lie; 'I'll Pay You Back' is essentially a plagiarized rewrite of The Isley Brothers' 'It's Your Thing'. However, the record is bad ass and infectious, and elevated Sam into a whole new thing that matched his always powerful vocals and guitar work into a very contemporary, hard hitting funk bag.

Tragically, this 45 was Sam's final release, as he died of a heart attack on December 1, 1969 at the age of 32 years old. I can only imagine how many more raw, from the gut records he would have given us had he lived.


As a bonus, here's an incredible clip of Magic Sam performing live in Europe, probably from 1969 as well. Not only is he demonstrating his earthy, straight from the soul guitar playing, but the opening interview show the man to be a soft spoken gentleman as well.

THE SHOWMEN - IN PARADISE b/w TAKE IT BABY 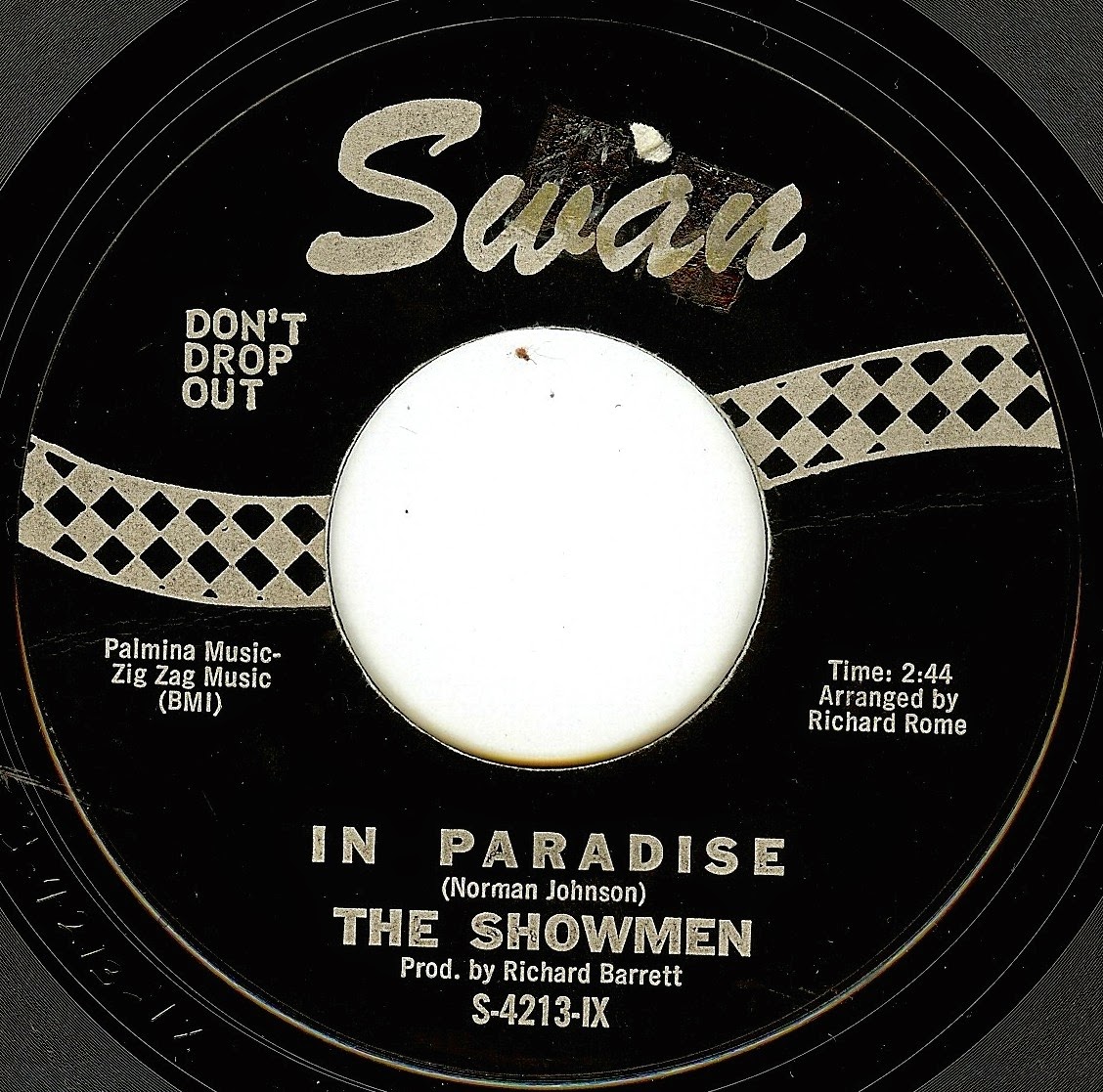 Phew, what an EXCELLENT double sider, oozing with vibe and Northern Soul goodness.

'In Paradise' has a mysterious, dramatic intro that leads way to an easy tempo stomper full of hooks, great vocals and hypnotic strings. Flip it over, and 'Take It Baby' is sure to amaze with a strong Motown-like groove and those always fantastic lead vocals, courtesy of the late, great General Johnson.

While the Swan Record label was releasing a slew of fantastic singles during '65-'66, they were having great difficulty getting their records distributed, and were verging on the brink of bankruptcy which turned out to be their fate in '66.

Led by the incredibly powerful vocals of Atlanta native General Johnson, The Showmen scored one national hit with their debut single (the anthemic "It will Stand", which hit the charts twice- once in '61 then again in '64). The music of the Showmen played a very important role in the "beach music" craze of the Carolina coast.

THE SHOWMEN - IN PARADISE 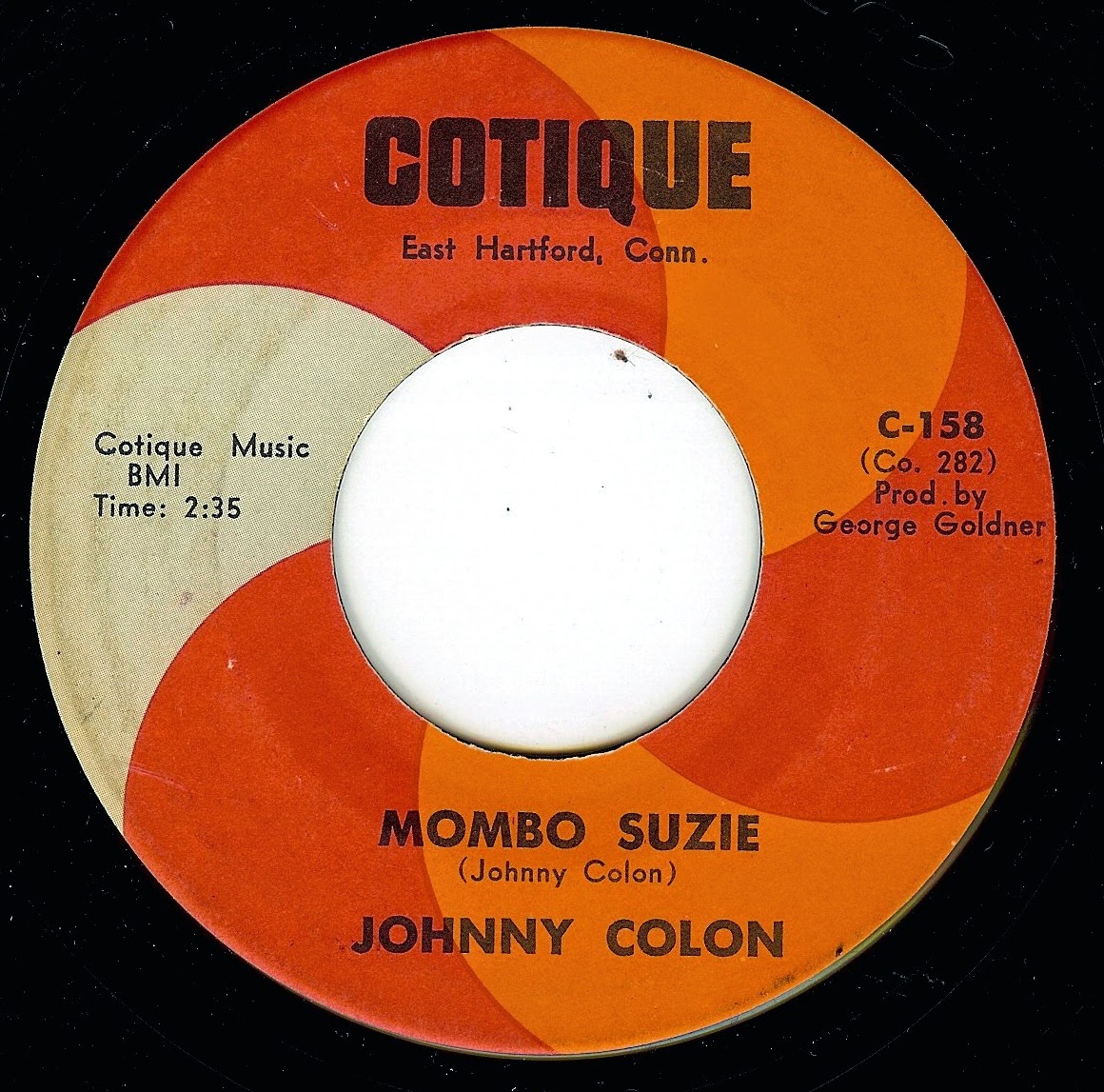 Bizarrely, this righteous boogaloo track was buried on the flip side of a Dickie Goodman (of 'Flying Saucer' "break-in" fame) novelty record.

Johnny Colon (a New Yorker of Puerto Rican heritage) was an important figure on the development of the boogaloo sound, although he isn't as well known today as some of his contemporaries. 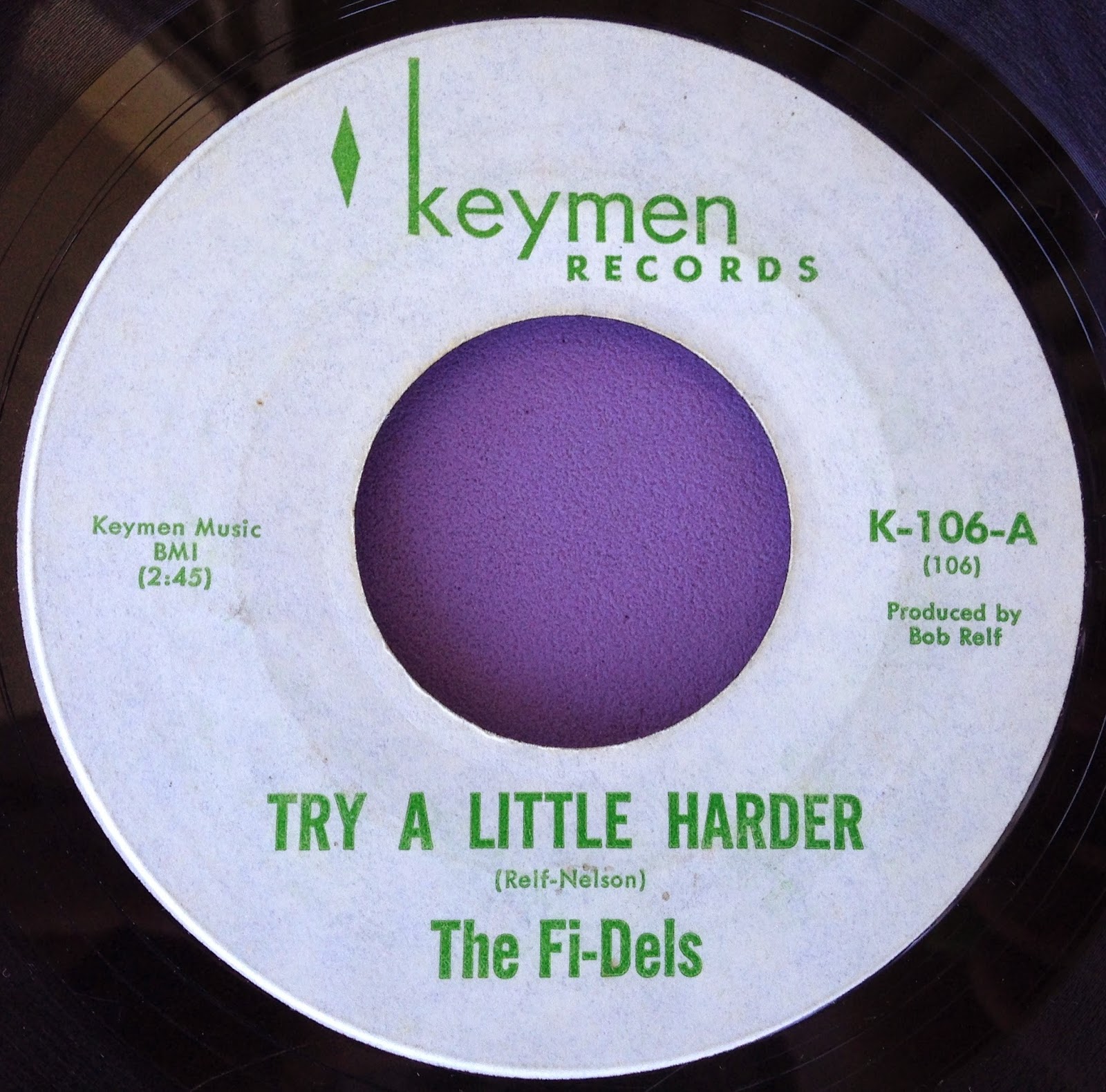 Here's one of those amazing one-off records that, when listening today, one wonders why it wasn't a massive hit in its time. Producer and co-writer Bob Relf was one half of Bob & Earl ('Harlem Shuffle' fame) and 'Try A Little Harder' is a great example of Los Angeles aping Motown with glorious results.

The flip side is an excellent deep soul track in its own right. Nothing else seems to be known about who The Fi-Dels were, but it wouldn't surprise me if Mr. Relf himself is singing on the record; the only release from The Fi-Dels.

THE FI-DELS - TRY A LITTLE HARDER

b/w YOU NEVER DO RIGHT (MY BABY)