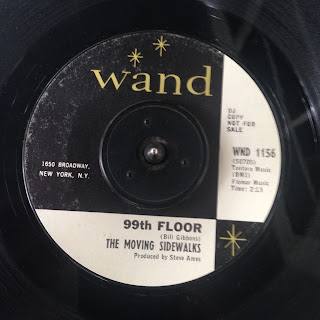 Folks, please donate whatever you can to help the good people (and pets) of the great state of Texas.

In honor of the Lone Star state, here are two of my FAVORITE Tejas rock n roll records- originally posted here sometime in 2007-2008.

The Moving Sidewalks featured Bill (later Billy) Gibbons on vocals and guitar, pre- ZZ Top. The group became one of the big draws on the Houston scene and not only opened for fellow Texans The 13th Floor Elevators but also when big time touring acts came thru town. Legend has it, when the Sidewalks opened for the Jimi Hendrix Experience, Jimi was so taken by Billy's playing that he gave him a pink Stratocaster and Hendrix was on record as stating how much he liked Gibbon's playing.

Two Sidewalks were drafted, which revamped the lineup and the band became ZZ Top in late 1969. I had the pleasure of meeting the ZZ fellas a few years back, and I mentioned this record to Billy and how much I loved it. His response was 'keep that one in a safe place', and I could swear thatas he said that sentence it sounded like one of harmonized voices as heard on Eliminator and Afterburner.

'99th Floor' will always be a garage rock perennial, as its inclusion on the Pebbles Vol. 2 helped cement its status as one of THE great psychedelic garage rock cuts. 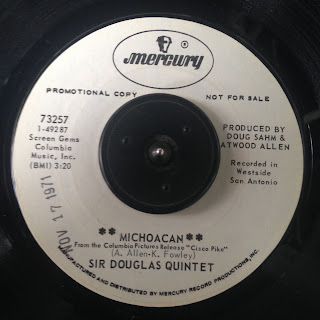 Ahhhh my beloved Sir Douglas Quintet; originally "designed" by producer (and, most disturbingly a convicted pedophile) Huey P. Meaux to be a Cajun flavored answer' to the British Invasion, the group went on to be pioneers in mixing beat, blues, soul, cajun, psychedelia and Tejano music in a way that shouldn't work but practically ALWAYS did, thanks to the brilliance and genuine soul of Doug Sahm.

This incredible track was cut for the excellent Kris Kristofferson film "Cisco Pike", and was only released as a 45 (itself a record that took me MANY years to find).

(2017 note) FUCK 'Sheriff Joe' for busting these guys for pot back in the '60's, and FUCK HIM for all his other racist atrocities. 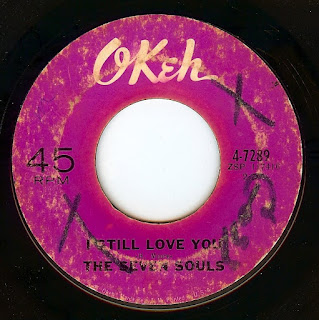 A few folks have written asking if I plan on making the tracks downloadable again. The answer to that is no, I'm afraid. However, there are several advantages to the new mode: for one thing, artists + songwriters (or their estates) will make a little $ off of the streaming listens. I'm uploading everything in uncompressed audio, so my transfers are nifty quality (other than the surface noise/ groove wear present on my copies). Also, everything will stay up forever (or at least as long as this is all possible). If you MUST d/l, there are plenty of ways to do it off of youtube, but you'll have to figure that out on your own (hint: it's very easy).

One of the greatest (and quite possibly THE finest) west coast soul records, this sublime 2 sider is a record I dreamed of owning for a long time, and happily it now resides in a special place in my collection. Sure, the labels may be in rough condition but the record sounds great and I am just glad to have it any any condition, and very happy to share it with everyone here. Part of the fun in collecting records is the anticipation of getting certain ones, and if we had 'em all, there's nowhere else to go (so I don't mind if it takes me many years to get that particular record; it's worth the wait). (2017 addendum: I don't have much at all on my want list these days, and the ones remaining are STILL so tough to find, even after so many years of digging IRL and in the virtual world).

The Seven Souls were formed at the University of Oregon, and were an integrated group who moved south to Los Angeles and were taken under the tutelage of musician/ producer/ pimp Larry Williams who cut this absolutely perfect record with them. Sadly, they only released one other record (OK but not at the 'other worldly' level of this one). The group sported not only two phenomenal lead singers (Ivory Hudson takes the lead on 'I Still Love You", and sax player Henry Moore sings 'I'm No Stranger') but also young Bob Welch (later of the early 70's lineup of Fleetwood Mac which gave us "Sentimental Lady") is playing those righteous, upfront guitar licks. 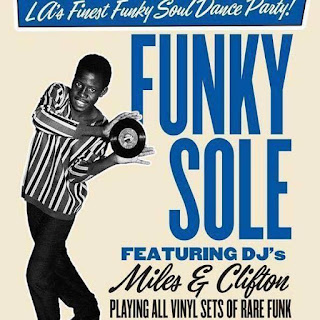 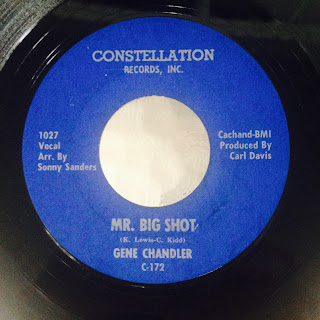 (first posted 9/16/08)
Gene Chandler was featured MANY times on Daily 45.  I absolutely love the guy, and am fascinated with his career which found him not only as performer, but also songwriter, A&R man, and producer. Gene also worked closely with the incredible creative forces behind the Chicago soul sound (Curtis Mayfield, Carl Davis, etc) and his choice of songs, writing, arrangements, and vocal style is (in this writers humble opinion) are the epitome of (Chicago) soul. This is a tricky record to find, as it was released at the very end of the line for Constellation Records. The label was out of luck, out of money, and out of hits and very few copies were pressed/ distributed. In a way, this record was ahead of its time, in that it shows a much harder edged soul sound (here, the guitar takes front and center in the mix) that started to be more prevalent within the next few years. 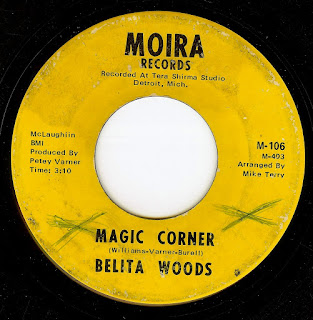 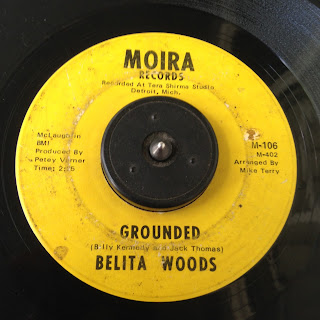 Although Belita Woods only released three solo singles, they are three records that I deeply cherish. In the later 70's Belita went on to sing with disco band Brainstorm, and had a few dance hits (driven mightily by her powerful voice) with that group.

Her first release (1967) was the incredible double sider "Magic Corner b/w Grounded"; which, in my opinion, is one of the greatest two-siders in 45 RPM history. 'Grounded' was the b-side, but it's just so damn powerful that I'm featuring it first. I'm a massive fan of the period in soul when the hard edged, funk tinged sound was coming in to more vocal oriented tracks; that sound is displayed here in an unparalleled way. 'Magic Corner' is a dreamy song, but it's no less intense thanks to the unbelievable vocal performance; Belita sings so hard that her voice distorts the tape and/ or microphone in several spots. Magic stuff indeed.

Belita Woods passed away far too young (63) in 2012; she was a touring member of the P-Funk mob for many years, a tiny little lady with a massive voice.

Lezli Valentine - I Won't Do Anything 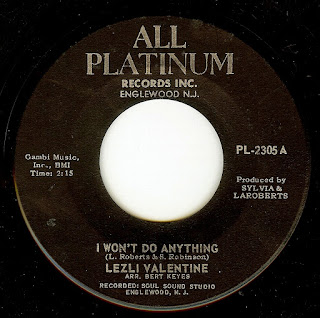 Gonna keep the daily 45 archives alive as best as I can, with the highest possible audio. It's truly touching how many people still write with kind words, or the people I meet/ speak to in real life that this site has made a positive impact upon.

Can't possibly keep up 'every day', but my goal is to repost something from the archives a few times a week, seasoned with the occasional 'new' track.


This record is downright HAUNTING. A lone acoustic guitar picks out the intro and sets the mood, which leads into the brilliant song and arrangement. Lezli Valentine (a founding member of The Jaynetts), turns in such a gorgeous, restrained performance, and is backed by a heavenly group of ladies (or is it Lezli overdubbed?) on backing vocals.

This record sounds like the soundtrack from a dream, and I can't get enough of it. It's so subtle that the depth of what's happening can easily be overlooked through its hypnotic power.