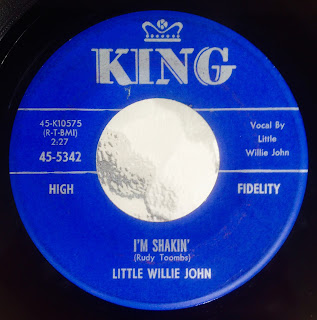 The great Little Willie John (big brother to Stax artist Mable John) lived a tragic life; while many of his records were big hits on the R&B charts (and several were covered later by other artists), he battled alcoholism. He died at age 30 while in prison.

This man's voice is one of the most powerful and haunting in all of R&B, and he could deliver a ballad in a way that can break your heart, and blaze a rocker in a way that can kick start everything immediately into 5th gear.

"I'm Shakin'" stands among his greatest records; the vocal delivers the lyrics in a way that cuts straight to the bloodstream, and the stop-start arrangement is brilliant, and is known to drive dancers wild out on the floor. This track was reissued in 1963 with drums overdubbed during the verses; in my opinion, the extra percussion only makes the record lose a little bit of its magic and I prefer the original. Either way, though, you're gonna groove.

LONNIE LESTER - AIN'T THAT A SHAME 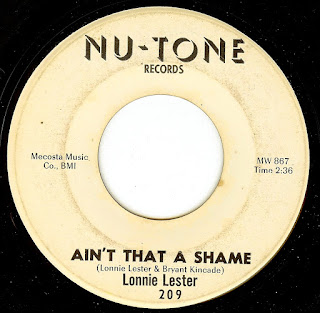 Gary, IN's (about 30m from Chicago) Lonnie Lester cut three fantastic and RAW singles in the mid-60's (some copies of this record are billed as Lonnie Lester & Chuck Danzy; Danzy was the saxman) of which this is his first.

This record has a fantastic, late night party atmosphere kind of feel, capped off with a storming, powerful vocal from Mr. Lester. 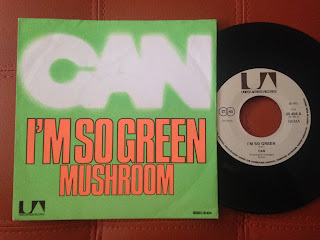 2017 has taken away the incredible CAN rhythm section; earlier this year, drummer Jaki Leibezeit passed, and today we lost bassist Holger Czukay.

While CAN was always a complete showcase for the brilliance of all members, Holger was responsible for getting the bands music onto tape, as he engineered and edited most of their recordings. It's downright mind boggling to think about how great these records sound, and taking into account that they didn't even have a multitrack recorder until after completing 1974's Soon Over Babaluma. All of their incredible work from 1968-1974 was recorded LIVE to 2 track tape. While there was quite a bit of splicing and editing done to the music (mostly in turning improv sessions into songs), there was no 'fixing it in the mix'. While so much time today is spent in studios doctoring tracks with beat correction, pitch correction, etc, no amount of trickery can EVER sound as good as brilliant musicians kicking out the jams HARD.


For a band that stretched out into long improvisations that are best experienced on LP, they released some COOL singles along the way (one of which, 'Spoon' was a massive hit in Germany). The single mix of 'I'm So Green' is WAY different than the LP, and has a trippy intro that didn't make it on to the LP.

I'm forever grateful to Musician magazine; back when I was 15 in 1990, I read a review that covered reissues of their early albums. I had not heard of them until this review, and the words were incredibly captivating, and the writing drew me in with parallels to the influence this group had upon hip hop, noise rock, post punk, new wave. Through this review, they became a favorite band of mine before I even heard a NOTE. With my limited allowance (which was almost ALWAYS spent on music), I picked up the CD of Ege Bamyasi (which the article pointed out was 'the' one to start with). I filled out the catalog as I could, and eventually replaced the shiny discs with vinyl as they appeared. My high school band tried in vain to play 'Vitamin C' and 'Mushroom', but we just couldn't get those songs to sound anywhere near what they should have. It was great to hear 'Vitamin C' used so well on the excellent series The Get Down. The 45 version is the same as the LP, but I'm presenting it here because it is such a defining moment of the CAN ideology - freaky, haunting, psychedelic, and flat out FUNKY. Holger and Jaki are locked in as tight as a James Brown rhythm section. 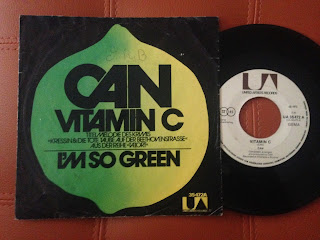 Tago Mago is perhaps the bands crowning artistic achievement, and it certainly is an album that I have listened to hundreds of times and somehow always take away something new each time. 'Halleluwah' was released as a highly edited single, with a non-LP b side to boot ('Turtles Have Short Legs'). While 'Turtles' may be a bit silly and almost novelty like, it's still so damn funky. 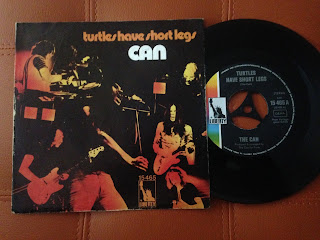