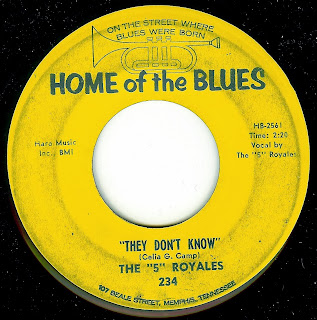 Hailing from Winston-Salem, NC, The "5" Royales were a VERY important group in the evolution of soul music- their recorded output in the 1950's combined their gospel roots into secular R&B, much in the same way that Ray Charles (more famously) did as well. James Brown acknowledged his debt to the influence of The "5" Royales, going so far as to say he modelled his own Famous Flames on the group, and also recording their song "Think" several times.

The group released a few gospel records in the early 50's as The Royal Sons, but by 1952 they began recording secular music and changed their name to The "5" Royales and continued with more or less the same lineup until 1965. This smouldering hot R&B side was released twice- first on VJ Records in 1961, then again on the Home Of The Blues label in 1962 (the same recording was used for both). 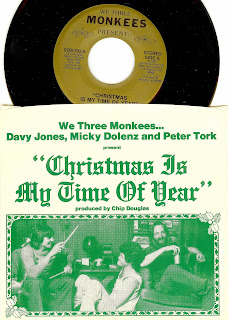 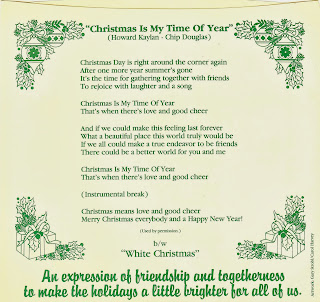 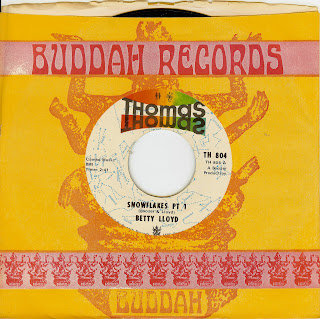 I also put together a holiday 'mixtape' this year for Aquarium Drunkard- check it out here!

JOHNNY MOORE - CALL IT WHAT YOU WANNA (I CALL IT LOVE) 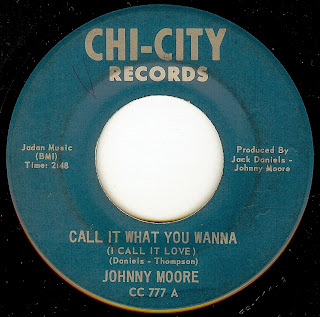 Chicago vocalist Johnny Moore had a powerful, appealing voice and released several great records. For whatever reason, his records charted locally in Chi-town but never made a mark in any other markets. Several of (producer) Jack Daniels' other records were picked up by the then massive Mercury Records family for national distribution, and it's a real head scratcher why they wouldn't have picked up this one.

This excellent track may bear a striking resemblance to The Temptations "(I Know) I'm Losing You", but I certainly don't mind. When a groove hits this hard, it just doesn't matter.

JOHNNY MOORE - CALL IT WHAT YOU WANNA (I CALL IT LOVE) 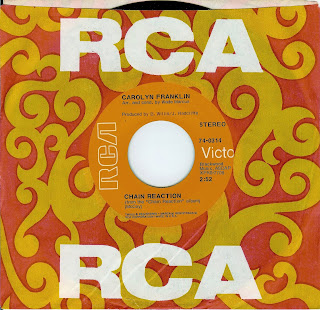 Aretha's youngest sister had a chance to WAIL on this record, and in my opinion it's the strongest of all of her solo records (thanks in a big part to the excellent song - written by the great Van McCoy - which is so strong it should have been a hit).

Carolyn's greatest successes were as a songwriter for several Aretha tracks, and she also contributed some superb backing vocals to Aretha records, occasionally with older sister Erma in tow.

Sadly, Carolyn died way too young; she was only 43 when she passed away from breast cancer.

THE 3 DEGREES - DRIVIN' ME MAD 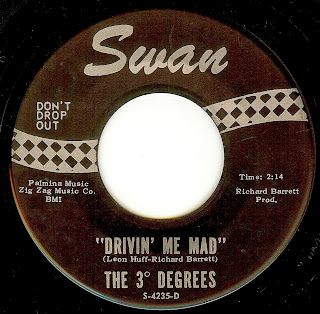 Phew... the close harmonies on this record drive ME mad, in the best possible way!

The 3 Degrees formed in Philadelphia in 1963 and went through a few lineup changes before settling into their hit making mid '70's soul-disco sound. Their early records for Swan feature some of my all-time favorite girl group vocals, and this another Richard Barrett production that takes the Motown blueprint and adds some Philadelphia seasoning to the pot; a recipe which eventually morphed into the very distinctive, string driven (but still rhythmic) Philly soul sound.

THE 3 DEGREES - DRIVIN' ME MAD

BITS AND PIECES - DID I SCARE YOU 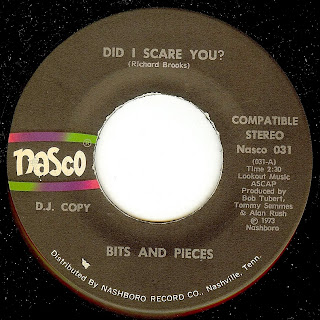 Gorgeous male/ female vocals and a lovely groove highlight this record that seems to be a one off from Bits And Pieces.

If you know any more info about this group, please write!

Yeah, I'm getting much deeper into early to mid '70's soul than I've ever been! With the exception of a few dozen ultra rare '60's 45's that remain on my want list, I think I've exhausted the wellspring of '60's soul sounds (although occasionally I hear something "new" that makes me go hmmmmm)

BITS AND PIECES - DID I SCARE YOU 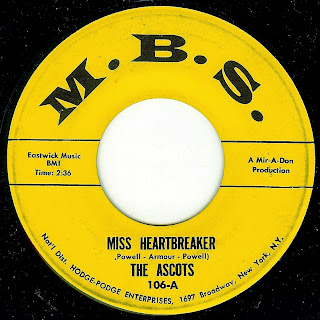 The Ascots were a group made up of four singers, three of whom were brothers (Archie, Eddie and Jerome Powell, plus Irving Haywood) from Washington, DC. The group took some serious cues from The Impressions on this record, but the more aggressive style of drumming is pushed to the front of the mix, giving the record a very unique sound.

The harmonies are earthy and gorgeous, and the swinging and propulsive groove are gonna make you feel mighty fine.