THE EYES - I'M ROWED OUT b/w WHEN THE NIGHT FALLS While 'I'm Rowed Out' may be a blatant re-write of The Who's 'Can't Explain', something about the energy of the record and the performance practically trumps the record that it was aping. To be fair, though, 'Can't Explain' was a record that was basically rewriting 'Louie Louie', and there's no denying that imitation can bring about great art. 'I'm Rowed Out' captures the excitement and nose thumbing of the beat era as good as any other record of the era. This record completely tanked commercially (along with the rest of The Eyes catalog), was never released outside of the UK, and as such it's exceedingly scarce- it's one that was on my want list for a LONG time. In my opinion, this record is the greatest of all the so-called 'freakbeat' records of the era!

Unlike many singles of the era, both sides are equally stellar, and the moody and raving 'When The Night Falls' (the A side when the record was released) is probably the more unique of the two tracks.

The Eyes, from the Ealing district of west London,  saw no fewer than SIX name changes during their brief existence between 1964-67.

THE EYES - I'M ROWED OUT

b/w WHEN THE NIGHT FALLS

ANN PEEBLES - SOMEBODY'S ON YOUR CASE 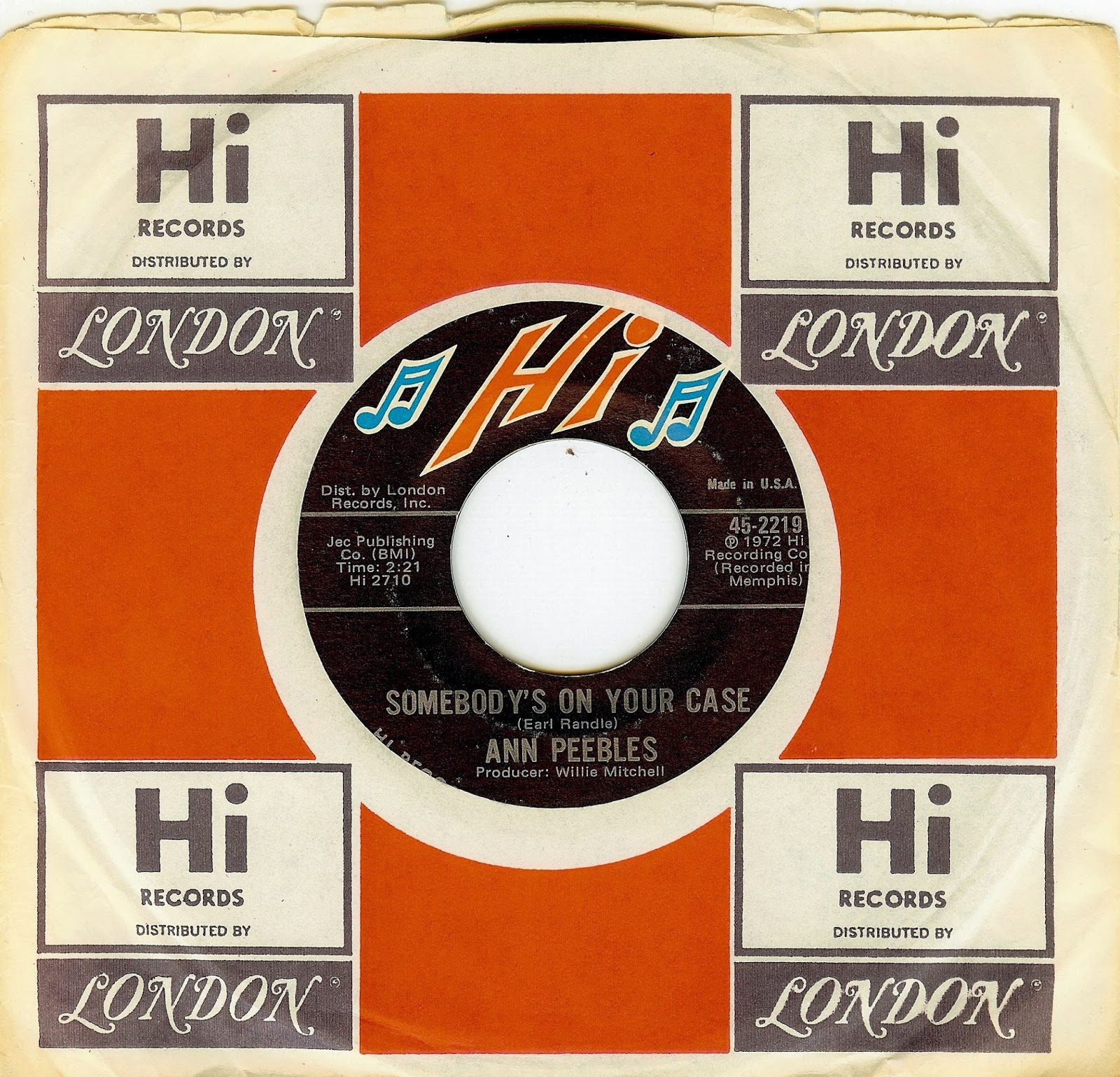 Ann Peebles is best known for her biggest hit - 1973's amazing 'I Can't Stand The Rain', but her raw, soulful vocals grace PLENTY of other red hot 45's and LP's. 'Somebody's On Your Case' is pure southern soul- smoky, sexy and hotter than a pan of boiling grits.

Like so many other soul singers, St Louis-born and raised Ann began singing in church at a young age, where her father was a minister. While in her early 20's, Ann was touring with bandleader Oliver Sain, where she caught the attention of Hi Records recording artist/ talent scout Gene 'Bowlegs' Miller, who helped her sign with the label, all before she turned 21 in 1968. Ann also proved to be a prolific songwriter, often collaborating with Don Bryant, who she married in 1974.

ANN PEEBLES - SOMEBODY'S ON YOUR CASE

HATTIE LITTLES - HERE YOU COME b/w YOUR LOVE IS WONDERFUL 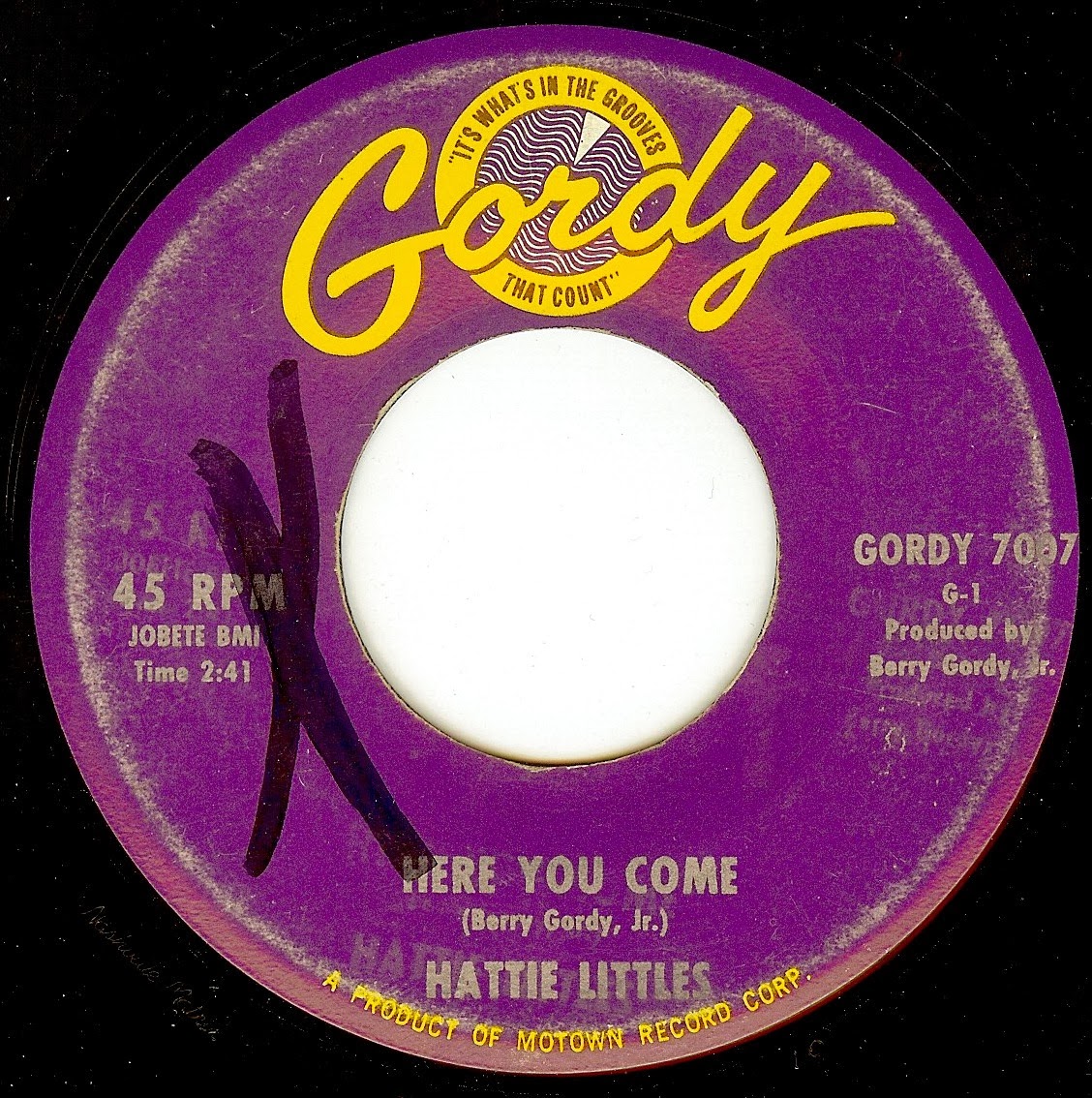 Detroit singer Hattie Littles was discovered by Motown producer/ songwriter Clarence Paul while she was singing at a local talent show. With a rich, powerful, bluesy voice, she could have added a different kind of dimension to the Motown sound. Sadly, she succumbed to substance abuse, and none of the other sides she recorded in the '60's were released. She did have a resurgence, when English DJ/ producer Ian Levine found her and brought her over to England to record and perform in the '80's & '90's.

Showing the influence of the type of Latin infused soul that producer Bert Berns was churning out in New York City, 'Here You Come' was, technically, the b-side, but I find it a bit stronger than the bluesy (also excellent) 'Your Love Is Wonderful'.

Sadly, the record went nowhere, and allegedly Hattie herself didn't like it.

b/w YOUR LOVE IS WONDERFUL

THE LEDGENDS - FEAR NOT b/w GOTTA LET YOU GO 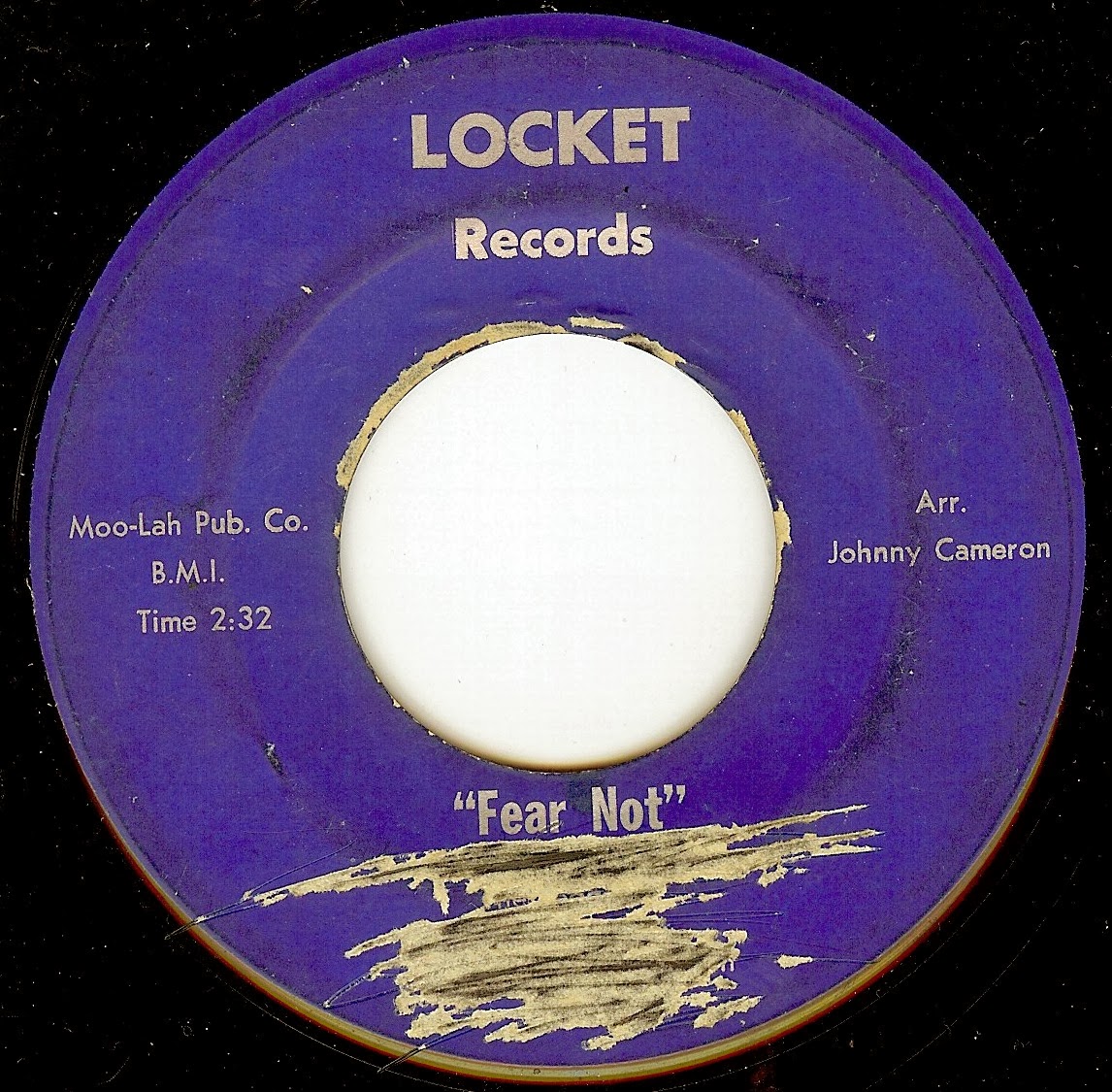 Why oh why would someone intentionally scratch out the name of the group on the label, on both sides to boot? This record did get re-released by a larger label, so perhaps after the record was licensed to the other label Locket Records wasn't supposed to sell it anymore? Who knows, but it sure is sad to see!

Both sides are excellent Chicago group vocal soul; 'Fear Not' is more uptempo and swinging, while 'Gotta Let You Go' is a typically pretty ballad of the era (and location). Both sides show that The Ledgends were yet another very talented vocal group that got lost on the shuffle of the very fertile Chicago soul scene. 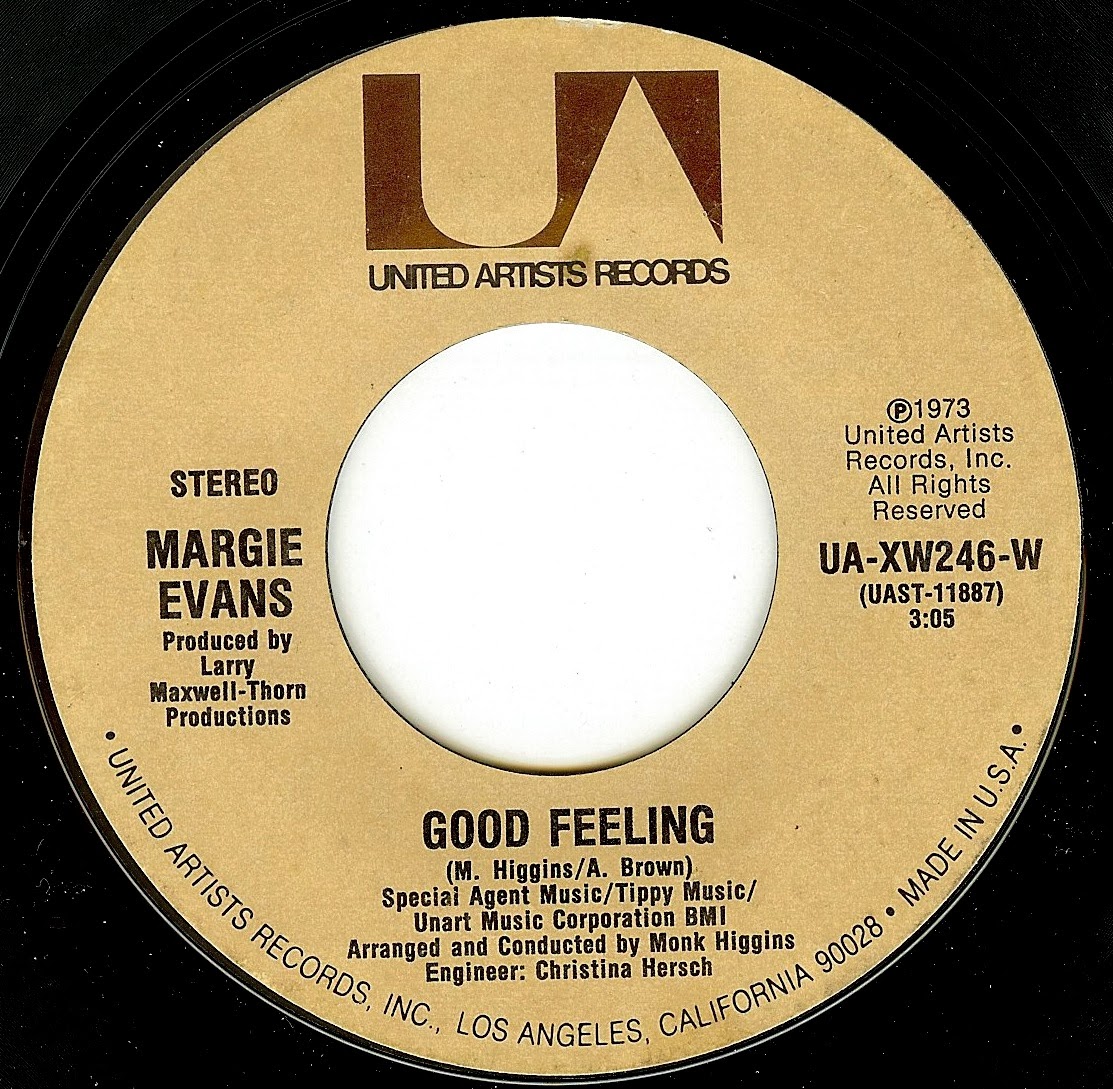 Margie Evans, backing vocalist extraordinaire for the likes of Bobby Bland and Johnny Otis, had her first chance to step out on her own in 1973, some 15 years after her career began in Los Angeles after moving west from her native Louisiana. And what a cool record it is, taking Margie's powerful, bluesy vocals (mixed up front and LOUD) on top of a super funky track, which was arranged by the always cool Monk Higgins.

THE THREE DEGREES - CONTACT b/w NO NO NOT AGAIN 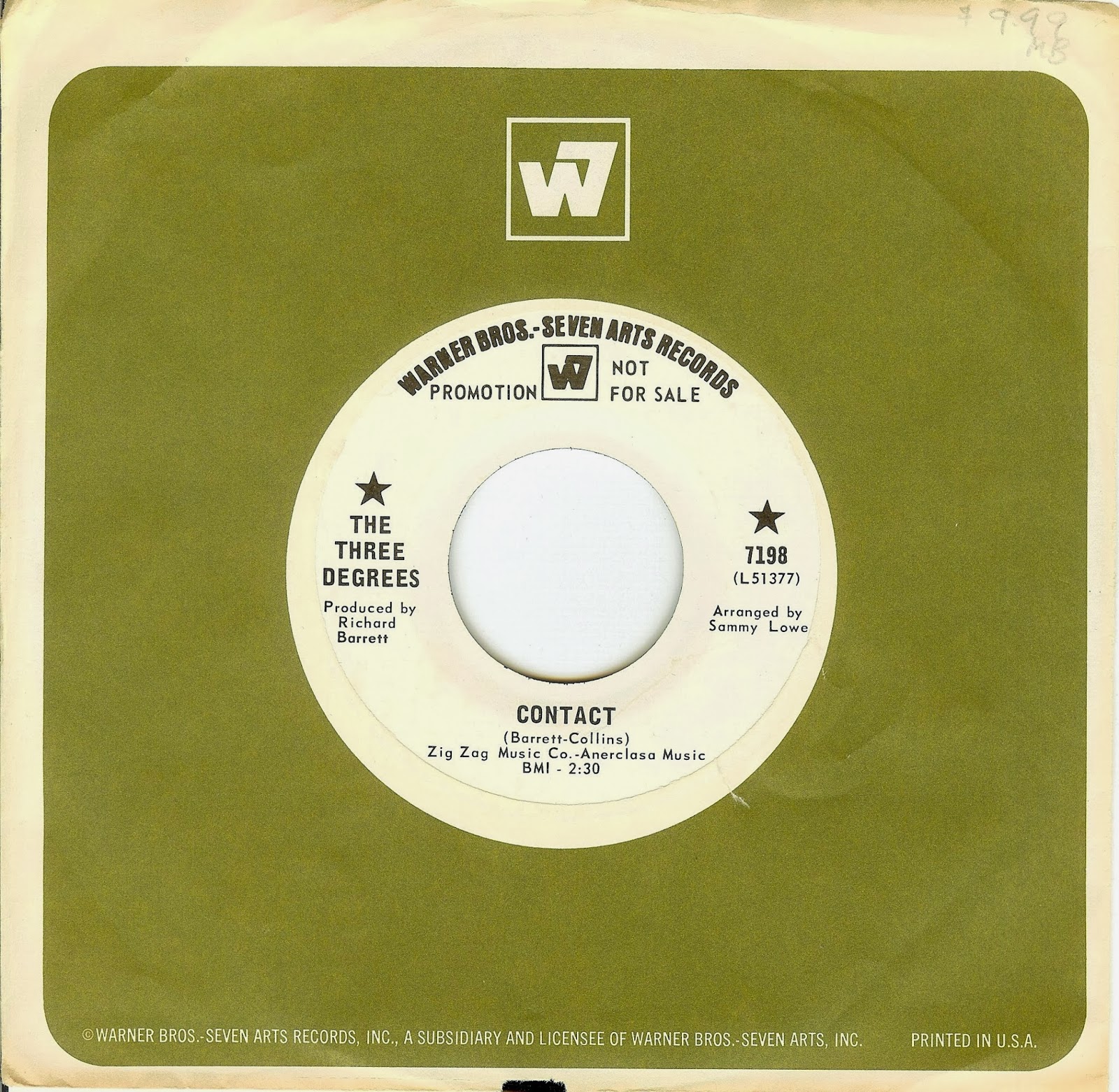 I woke up with this song ('Contact') in my head this morning playing on repeat, so I take that as a sign that it's time to feature it here on this very forum. In fact, I think I was dreaming about listening to it- no surprise, as those three heavenly voices are certainly daydream inducing.

The 3 Degrees formed in Philadelphia in 1963 and went through a few lineup changes before settling into their hit making (and brilliant) mid '70's soul-disco sound. This record is a departure from their earlier Swan releases (which feature a strong Motown influence and also happen to be some of my most cherished girl group 45's), although the same producer (Richard Barrett) was behind the glass. 'Contact' takes the whole space race scene and turns it into something completely poetic, with an arrangement that's complex, swinging and downright mind blowing, thanks to veteran musician/ arranger Sammy Lowe (his arrangements include James Brown's orchestral flights of fancy 'It's A Man's Man's Man's Man's World' and 'Prisoner Of Love', along with arrangements for Nina Simone, Sam Cooke and countless others).

The flip side, 'No No Not Again' is another fine example of the soul waltz; a style which was never utilized as much as it should have been, in my opinion, but those records that incorporate it are very near and dear to me. Once again, those heavenly Three Degrees harmonies will melt the ice and warm the heart.

This single was a one off for Warner Brothers Records, and perhaps it was just too far out to attain hit status.

b/w NO NOT AGAIN