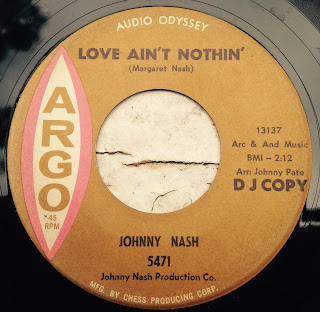 This amazing track was recorded during the in-between period of Johnny Nash's career, between his hitmaking eras. Johnny started out as a  teen idol in the 50's, then became immersed in Jamaican music c1967 where he began not only recording on the island but also became involved with Bob Marley and the Wailers. Even though this was recorded before Johnny's Jamaican period, it still shows a very strong bluebeat influence. This is one of those songs that, in a just world, would have been a massive hit.

I would love to know who the backing musicians are on this track. It was arranged by the great Chicago fixture Johnny Pate.