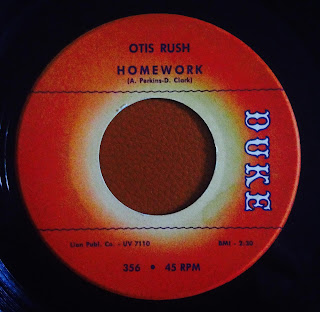 It's sad to hear of the passing of Otis Rush; he was truly one of the last of a very special breed. It's a tragedy that Otis was unable to play guitar for the past 15 years due to a stroke, as he was one of the greatest electric blues guitarists in history.

After the city laid out the foundation of electric blues in the late '50's thru the 1950's, Chicago blues of the 1960's turned into a whole new thing. Influenced by the budding soul music scene, the so-called "West Side" sound of Magic Sam and Buddy Guy introduced a new type of intensity and a hard swinging rhythm into a reverb drenched stew that was unique, propulsive and (in this writers opinion) the last gasp for the sound before it veered into cliche after cliche.

Otis Rush was only 27 at the time of this recording, but his career at the time had slid into a nadir after several r&b hits starting in 1956.

While it's merely speculation on my part based in no small part by my love of where the music "went" during this era, I honestly believe that these great Chicago musicians realized that in order to appeal to a younger generation it was crucial to modernize their sound, and the result was a sophistication in the music that is heard brilliantly on this side (just LISTEN to what the organ does throughout the track, not to mention the horns). If Otis' "Oh Baby's" (especially the one heard at :32) doesn't send a shiver down your spine, you may have landed at the wrong place by mistake. 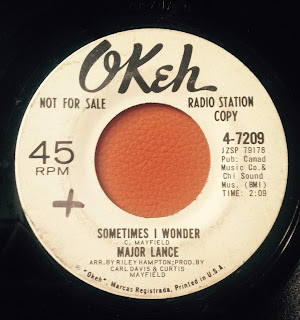 Understated in its elegance, 'Sometimes I Wonder' is one of those tracks that epitomize the Chicago soul sound.

Major Lance may have been a bit lacking in vocal strength, but his delivery and charisma (and top notch material) push his best records into greatness. This may well be my favorite of his; a superb Curtis Mayfield composition, with Curtis and the Impressions providing glorious backing vocals, and a typically superb string-laden (but still kinda raw and very exciting sound) that Mayfield- (co-producer) Carl Davis and (arranger) Riley Hampton excelled at.