ALDER RAY - MY HEART IS IN DANGER 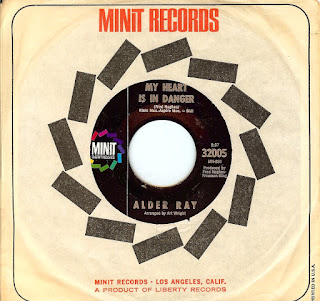 It's a real mystery as to how a record this great could be released by a nationally distributed label and languish in obscurity, but there are hundreds of examples of this kinda injustice. It's a great song, the arrangement cooks, and Alder Ray's vocal performance hits the stratosphere.

When I first wrote about this one, there wasn't much info available about Alder Ray, but I've since learned that she was a member of The Delicates, a Los Angeles girl group. She released a few other singles, all of which failed to catch on, but remain sought ought by collectors. Alder certainly deserved better. This song was written by Los Angeles soul singer/ songwriter Fred Hughes (not to be confused with Oakland, CA's Freddie Hughes). This is another all time favorite side of mine.