Thank you for everything, Richard. 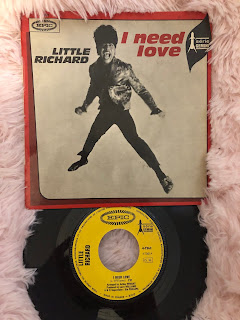 Little Richard cut some great sides in the period after he went lighter on religion and went back to the devil's music (including the great deep soul cut "I Don't Know What You've Got'...which features Hendrix on guitar) but it took Larry Williams as producer to get some of that old fire out of the Georgia Peach once again.

This red hot number is one of the many great cuts from 1967's "The Explosive Little Richard" which is an excellent album from start to finish. Practically every cut is a great dancer, but Okeh records chose wisely when they issued this one as the single. Unfortunately, it didn't revive Richard's career (as it should have). 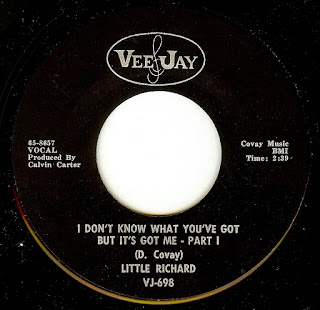 Every time I hear the intro to this great record, it reminds me of the flamboyant Little Richard interview in the 1973 Jimi Hendrix film where he claims that Jimi was ALREADY a star when he met him and was a member of Richard's band. As the luscious guitar intro proves, even though Jimi was playing in the Curtis Mayfield style at the time of this recording, he was a musician of grace, taste, finesse and a giant TALENT.

Allegedly Jimi's time with Richard was cut short due to the amount of attention Jimi was receiving on the bandstand which infuriated the star of the show, but fortunately he stuck around long enough to cut this one and only single.

For nearly five years (late '57 until 1962) Little Richard had left the sinners life of secular music, and became a preacher. It wasn't until an offer to tour England in '62 came on the table (thanks to Don Arden, villain of yesterday's post)that Richard made a return to his signature secular sounds.

This record shows off beautifully how well Richard can SING. Everyone knows that he can peel the paint off of the wall with the shouts, but damn does he put in a stellar vocal performance here.