THE 3 DEGREES - ARE YOU SATIS-FIED 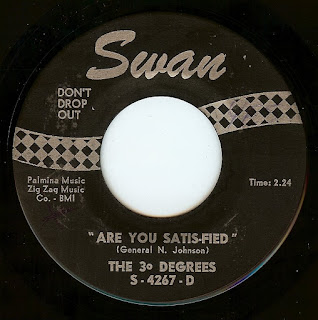 If I was forced to compile a '20 favorite 45's' list, this one would undoubtedly be near the top.

This scorcher was released right around the time that tiny little Swan records went belly up, limiting any chances of much promotion, and more than likely very few got pressed. This song is yet another example of one that with the right exposure probably could have been a massive hit. The song was written by the late great General Johnson, he of The Showmen and Chairmen Of The Board.

The 3 Degrees were formed in Philadelphia in 1963 and went through several lineup changes (I believe this is their final record with the original lineup) before settling into their hit making 70's pop-soul sound.