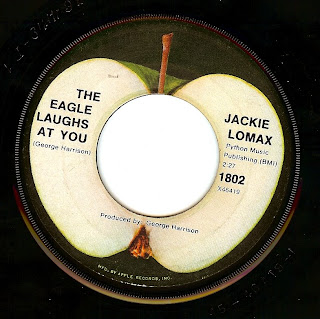 As part of the Mersey Beat scene, it's no surprise that Jackie Lomax and George Harrison rubbed shoulders early on in their careers (Jackie was in the Undertakers at the time). Jackie was one of the first artists signed to Apple Records, and his brilliant Apple album "Is This What You Want" (the CD of which is out of print and selling for silly money) was produced by George Harrison. The first single from that LP, "Sour Milk Sea" is stellar, but the b side is a CRACKING piece of psychedelic English soul (I recommend listening to 'The Eagle Laughs At You" first). Sounds like Eric Clapton blazing away on guitar, too (caught at a precious time before he became a big bore.) 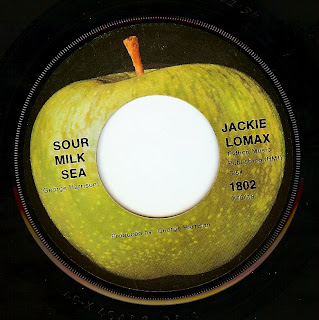 I've not heard this song in ages! Thanks. And did I mention, this blog rocks! W.

can i make a request for some steve mancha or melvin davis. some chicago groovesville tunes. please

Two excellent sides. Thank you. Jackie Lomax is a truly underrated artist. And, apparently, a champion guy. Lives out in Ojai.

Great songs! It's too bad Apple was so dysfunctional as a business... they sure found some great music, though!

Yes sir, Alex. You figure, the Beatles had great taste in music from the beginning (judging by their always excellent choices of cover tunes) so it only made sense that their label had a very high standard.

I don't know why no one's pointed this out yet(maybe no one knows) but the personnel on both of these tracks is Eric Clapton,George Harrison(and it's pretty obvious which solo is who on Sour Milk Sea),Paul McCartney, & Ringo Starr. Don't know who's on the horns on Eagle though. The whole album is really good.