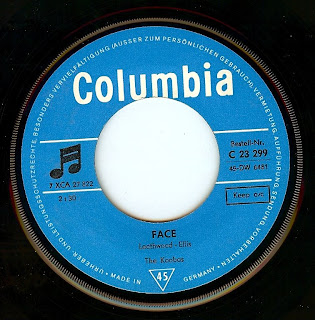 Allow me to tell the tale of a geeky record collector.

One of the ways I seek out my records is through ebay, and I always have the maximum allowable saved searches (100) where they email me when items matching pop up. I've had the Koobas as a saved search for YEARS and this record recently popped up. Imagine my excitement in the last few seconds when I hit my maximum bid that was higher than I thought it would sell for. Alas, in the last second I was outbid by a few measly pennies.

Even though I told myself it's only a record, in my dismay, I checked GEMM.com (a great database of records for sale from dealers all around the world) once again to see if there may be a copy. I'd checked before, but never had any luck. Lo and behold, there it was; for sale in England for less than HALF of what I bid! Ahhh, a happy ending!

The Koobas were from Liverpool (their first single billed them as The Kubas- not the best connotations for a commie fearing sixties), and were managed by Brian Epstein. other than appearing in the film "Ferry Across The Mersey" they never had much success at all. The only LP they released in the late sixties sells easily for a thousand dollars!

Here they whipped up an ultimate mod stomping/ dance anthem in FACE (although "Sweet Music" is the actual a side and a fine track in its' own right, I have selected "Face" as the dominant track here.

Speaking of stomping...If any of you will be at the Ponderosa Stomp, I am pretty easy spot (I'm 6'4"). C'mon by and say hi or shoot me an email.

As I will be out of town, the next post will be on FRIDAY... See you then!

Face is posted twice - where is Sweet Music? thanks

fixed! thanks for the heads up.

Derek,
you have the right to tell us yr story. It is fun and a great victory to find a record that was on yr list!
Thanks for sharing!