IDES OF MARCH - GIVE YOUR MIND WINGS 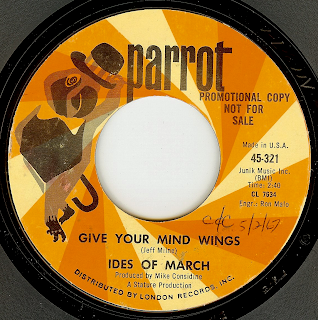 Several years before they went brassy and added a horn section, Chicago's Ides Of March released a string of excellent, jangly garage rock singles for Parrot and Kapp Records that went nowhere (other than local AM radio success). This track shows a fantastic British Invasion influence and was written by a songwriter (Jeff Milne) who started a band called Factory around 1969.

This is my personal favorite of their early singles, and it's one of those records that soars along magically with gorgeous harmonies and guitar jangle for 2:40. And it's a PERFECT 2:40.

Maybe I'm looking far too into it, but it seems as though the band was caught in a moment here where a fantastic track, a string of flop singles behind them, naivety, talent, (perhaps) chemicals all came to a crossroads and drove them into another dimension. This record is just resonating in a very magical way with me this morning.

IDES OF MARCH - GIVE YOUR MIND WINGS

That's very cool! It's like a cooler version of 'Listen To the Flower People' by Spinal Tap.

The music was great. I really like it a lot. It was like listening to a live performance and it was recorded so fine.

I think they distilled the sound more effectively on "You Wouldn't Listen." They seem to have migrated from Pop-Psych to Pop-Sike.
Also, Duck Dunn... born in Memphis---> died in Tokyo. Jim Jarmusch seems to have anticipated this (see Mystery Train).