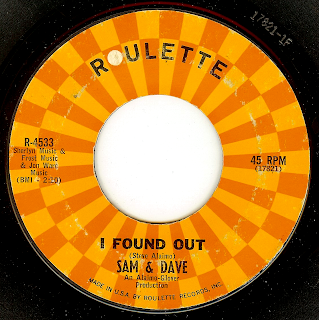 While the history of Sam & Dave as Stax recording artists and THE GREATEST male soul duo in history (not opinion but fact), it is certainly less known that the duo recorded for three years (for Roulette and two other labels) without ANY hits. Sam & Dave were signed to Stax in 1965 which began a run of hits that cemented the duo's status as the most dynamic duo of the 1960's. Need proof? Simply watch the Stax Live In Europe 1967 DVD; no other performances in history can match the electrifying stage presence, tension, competition and talent of these two.

As for their early recordings, in my opinion this is the best of the bunch. Kinda hip, kinda square Steve Alaimo wrote and co-produced a number which combines secular lyrics with a feel and drive that's straight out of a southern church, and the end result is a real kick in the pants that, for the first time, TRULY shows the potential that these fellas were gonna reach during their Stax years.