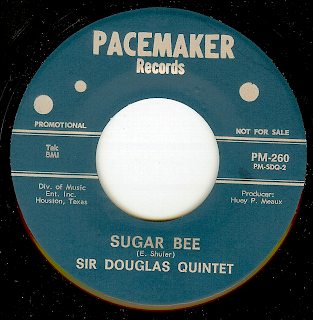 When producer Huey P. Meaux wanted to create his own southern-fired Cajun answer to the Beatles, he couldn't have chosen a better frontman in Doug Sahm, himself the Sir Doug of the Sir Douglas Quintet. Sahm was a child prodigy who cut his first record at age 11, and had gone on to record a string of great country and r&b records while in his teens and early 20's.

While the group struck with a massive hit on their second shot (the incredible "She's About A Mover"), the formula was set in place for their debut 45. This is a record that I've had in my collection for quite a few years as a curio (since I love the SDQ so much) but I never felt it was daily 45 worthy until I heard it on shuffle play the other day and realized beneath its lunkheaded surface there's some amazing qualities lurking. On top of the cajun two-step/ British beat thrown-in-a-blender rhythm, there's some incredibly cool bass/organ counterpoint where each musician plays sligtly different changes; to some it may sound like a mistake, but it's repeated often enough in the song to tell me it was no accident, and it's funkier than a mosquito's tweeter! Plus Doug and the backing vocalists take a simple lunkheaded lyric and turn in an excellent, exciting performance.


As a bonus, here's a killer French Canadian version of "She's About A Mover", from Les Tetes Blanches. While the organ is sorely missed in this version, the band was perhaps wise in not trying to duplicate Augie Meyer's magical Vox Continental groove; Augie is the true master of the combo organ, heard throughout the career of the SDQ and also in great effect on Bob Dylan's late period masterpiece "Time Out Of Mind". 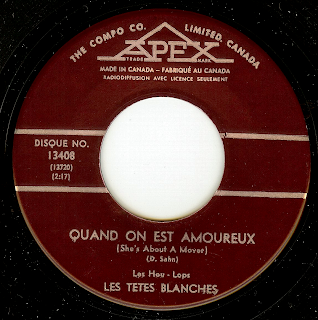 I can`t wait everyday to check your site, great stuff!