THE WURDS - BORN IN CHICAGO 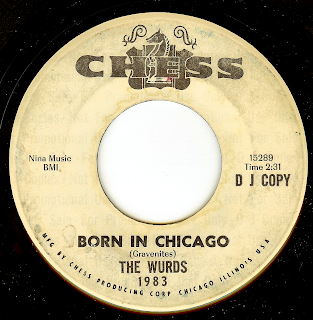 The Wurds, from Chicago, started life as The Dirty Wurds; a band who cut a single called "Why" in 1966 that remains one of the most intense slabs of nascent punk rock ever committed to wax. The Dirty Wurds were a teenage band from Chicago (age 16-17) who cut their teeth together playing bluegrass (!) then went in the beat direction. According to the liner notes from Pebbles, they would regularly open for national acts and practically cause riots!

Here we find them one year older and still just as intense as before (although the primal screams as heard on "Why" are absent). Most surprisingly of all, the group were signed to Chess Records. My assumption is that there was enough of a buzz around the band (they played at Chicago's 1967 Be-In/ Love In) that Chess felt they would be a good band to cross over into the rock n roll market. This record (a fabulous cover of Nick Gravenites blues classic as first heard on The Butterfield Blues Band's 1965 debut) was simply far too raw and unhinged to make any kind of commercial dent, but they sure make for an exciting relic 45 years later.

THE WURDS - BORN IN CHICAGO

I LLLLllike it too much!