BONNIE & THE TREASURES - HOME OF THE BRAVE 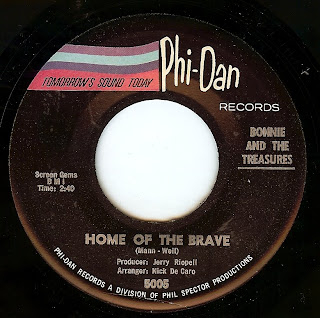 For years this record was thought to be Ronnie Spector in disguise; it was later discovered that the singer of this record is a woman who went by the name of Charlotte O'Hara. Charlotte not only was a regular backup singer at Phil Spector sessions but also had an alternate career in the bizarre world of song poem records (in short, a production company offered to "make songs out of your poems" for a fee, creating some of the weirdest records ever made in return).

While not produced by Spector (although he was allegedly in the studio and Phi-Dan was a label he owned), Jerry Riopelle captures the wall of sound uncannily like Spector on this glorious record.

BONNIE & THE TREASURES - HOME OF THE BRAVE


for those who are so inclined, there's lots more about Charlotte/ Bonnie here at the excellent Spectropop website.
Posted by Derek See at December 06, 2009

Thanks, The more I listen to this the more I like it. I love the Ronettes and all that Spector stuff anyway. Regards Dave.