OTIS WILLIAMS AND THE CHARMS - I GOTTA GET MYSELF TOGETHER 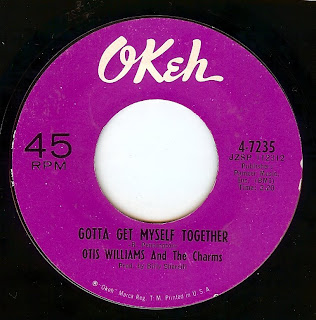 With a long-running career that began in the early 50's climate of doo wop, teenaged Otis Williams and his backing vocal group the Charms were discovered by King records producer Syd Nathan (who initially only wanted Otis, who insisted that the Charms stay with him.) After a string of r&b hits throughout the fifties, Otis was drafted into the army. Upon his exit (and also during his leave time in the army), he cut a few more sides for Syd Nathan/ King records, then quit music temporarily and attended school to become a barber(!) in 1963.

In 1965, Otis put down the scissors and cut some sessions for Okeh records, where he embraced the current soul stylings and cut this whopper of a record in late '65. Surprisingly, this slamming, raw records was produced in Nashville by country-politan producer Billy Sherill.

OTIS WILLIAMS AND THE CHARMS - I GOTTA GET MYSELF TOGETHER
Posted by Derek See at December 09, 2009

Always loved this record -- actually, I may prefer the other side, a remake of the old Patsy Cline hit, I Fall To Pieces (it was cut in Nashville, of course, but you wouldn't know it by listening to the record).