JOHNNY ADAMS - PART OF ME 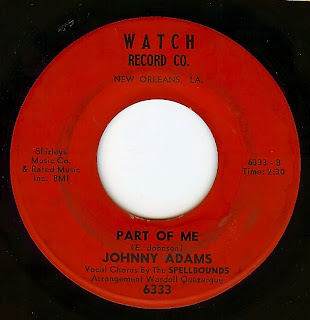 Acknowledged by many as the one of the greatest (if not THE greatest) vocalist who ever came out of New Orleans, this record definitely holds a stake to that claim.Sadly, he never received much national attention, up until his death in 1998. Johnny's performance completely OWNS the record (no mean feat, considering Wardell Quezergue's incredible arrangement).

Much thanks to Ana B, who turned me on to this record. She also happens to have written today's guest post!

Damn, that's a nicer copy than I own.

Just a heads up, there are two [or is it three?] other Johnny Adams singles on Watch. There are all worth owning.

I don't think I mentioned this when I posted the song either, but the writer 'E. Johnson' is Earl King. The man wrote some seriously amazing songs.

It's SLIGHTLY off center, though!