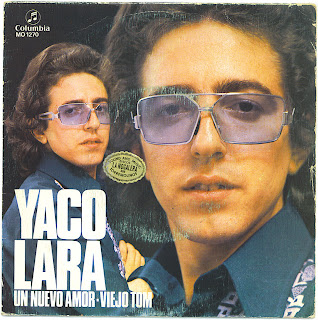 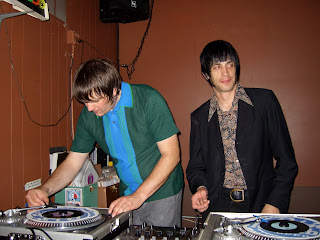 A true "brother from another mother", Eric Colin is not only one of the finest DJ's on the scene, possesses an incredible knowledge of great music in all shapes and forms and is also an incredible drummer and all around raconteur. I am very pleased to have a guest posting from him! The photo is him and I (me on the left, Eric on the right) from this past September when we had a friendly turntable dual at the Burlington Bar in Chicago which was one of the most fun nights I've ever had DJ'ing. Here's what Eric has to say...

I’ve have no idea what it was with the Spanish in the 60’s and 70’s and their penchant for making monster dance records.
Perhaps it was the proverbial “something in the water theory” but god damn, it was a trend that even their crooner types got in on.
Case in point is Yaco Lara; a native of Valencia Spain (I think) who has been making records either solo or as part of a group since the late 60’s but even more to the point is his monster B-Side from 1972 entitled “Viejo Tom”.
Made for the dance floors and proven to get you movin; this is record is a veritable bunch of do’s (as opposed to don’ts) crammed into a mere 3:25.
More horns than you can shake a stick at, a propulsive, prominent bass, female backing vox and Yaro’s predilection for taking his voice into a glass shattering falsetto!
I could liken this record to some of Tom Jones funky as hell late 60’s moments shot through the mind set of a bull fighter and we might have something approximating this wicked groove!
So kick back enjoy this cut and raise a hearty glass of Rioja to Mr. Lara and his death defying vocal range!
Posted by Derek See at December 29, 2009

What a righteous jam!
Kind of a J.C. Superstar (The brown LP version) feel to it, only i can't understand the words.
The horns, breaks, the screaming falsetto... Wild!