THE SYMPHONICS - NO MORE 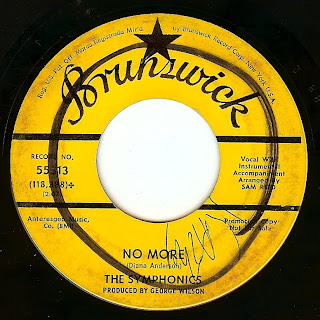 While this group released at least 2 records (this apparently being the second), I can't find out ANY information whatsoever about them. I've also never seen the name George Wilson listed as producer on any of the other records I own. Help, anybody?

Once the first notes start hitting and the slightly out of tune (but oh so great- they sound a bit like cats in heat) backing vocals kick in, there's no doubt that this song is gonna be a heater of the first degree. I just love how the lead singer shouts herself hoarse by the last verse.

Here are little information about The Symphonics, from Philadelphia apparently.

good one, thanks derek