JAN BRADLEY - IT'S JUST YOUR WAY 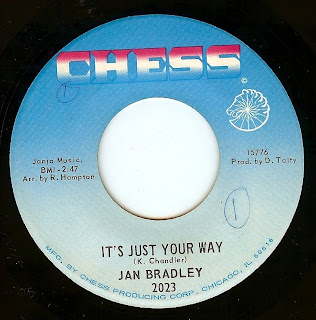 As a guitarist, i have to say that I'm completely obsessed with the guitar playing on this record. Definitely rooted in the Curtis Mayfield school (although I don't think it's him due to a legal dispute between Curtis and Chess records) it propels and drives this song into sublime territory on it's own. Add Jan's gorgeous vocals and that lonesome harmonica and groovy bongos and out comes a subdued arrangement of utter genius.

Jan Bradley was discovered singing while still in high school, and shortly after graduating recorded the incredible "Mama Didn't Lie" with Curtis Mayfield behind the boards (it was a huge r&b hit which also crossed over to the pop charts). She continued releasing records til the early seventies when she left the biz. She became a social worker on the Chicago south side, but still continues singing in her church choir. Lucky parishioners!

Wow, what a great record. Normally I like the more upbeat tracks over the ballads but this one is just soooo good! It sounds as if it could hve been written by Smokey Robinson and, coming from me, that's high praise indeed. Thanks for posting this.