VAN - EVERY DAY IS LIKE A HOLIDAY / FEED THE FLAME 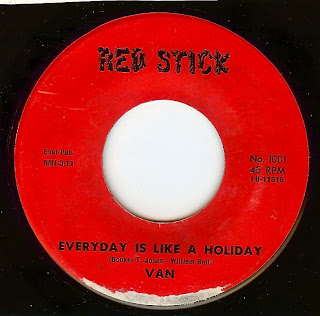 Cut by William Bell for the Stax/ Atlantic Soul Christmas LP release, "Every Day Is Like A Holiday" is a favorite Christmas style song that doesn't go over the top oozing with Christmas sentiment (although I admit I'm a sucker for lots of Xmas music). I wanted to feature the William Bell version, but I don't have it on 45. Then I remembered this gem that I picked up at Domino Sound Records in New Orleans (one of the best little record stores on the planet, as a matter of fact).

Turns out "Van" is Van Broussard, one of the progenitors of the Louisiana "swamp pop" sound; this 45 finds him in deep southern soul mode and both sides are truly excellent. Luckily for you, while researching this record I flipped it over and played "Feed The Flame" and I had forgotten how incredibly haunting the song is (written by the genius Dan Penn/ Spooner Oldham duo). "Feed The Flame" was also issued nationally on Mala records, but with a different flip side.

Holly Crap! This is probably the best Christmas song I've heard yet!!! Amazing. Many thanks...

A double whammy today. Country drippings all over Feed The Flame. Van sounds like Percy Sledge on that track. Thank you for flipping the 45 over.

Thank you very very much for this truly moving song.