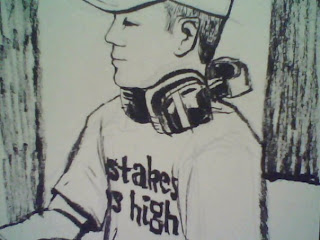 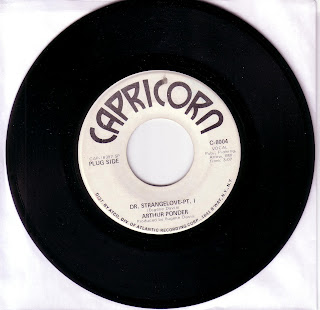 I am happy to announce the first in a series of guest posts from fellow bloggers, DJ's and vinyl junkies. Today's post is brought to you by David Ma. In addition to being an excellent DJ, David is a very prolific writer and has been published by Wax Poetics, Pitchfork, The Source, URB, XLR8R and Soul Culture. He publishes a great blog of his own as well; www.NERDTORIOUS.com

Here's what David has to say...

I first heard this on a mixtape years ago. “You know, that song where he says ‘Doctor Strangelove, that’s my name’ in the chorus,” I’d ask every music lover I knew. No one had info besides the occasional, “Does it have anything to do with the film?” “No” I’d say.
This year, I finally got it. I wish I could say I found it digging somewhere in Georgia, but it was Ebay. So here we are.

Arthur Ponder began his career singing with Johnny Jenkins, a left-handed guitarist and known influence on Jimi Hendrix who played on Otis Redding’s early work. Not much info exists on Arthur himself, who recorded for Capricorn Records, a Georgian label founded in the late ‘60s known for spearheading Southern Rock led by their biggest artist, The Allman Brothers Band.
Arthur’s credited for additional vocals on other projects and also cut singles for Trey Records, another local Georgian label. He continually, albeit very quietly, put out material well into the ‘80s as far as I know.
I’ve since heard Arthur’s other work, but “Dr. Strangelove” is his defining opus: a song where he teeters on the verge of a nervous breakdown in the chorus, and where steady drums and a beautiful bassline propel the arrangement for roughly 3-minutes. The singing is so pained but the music is so sunny. It was both written and produced by Eugene Davis. It’s killer Georgian soul, overtly filled with so many warm elements that can grab you. Enjoy.

Cool rhythm too. Thanks. W.