BABY WASHINGTON - IT'LL NEVER BE OVER FOR ME 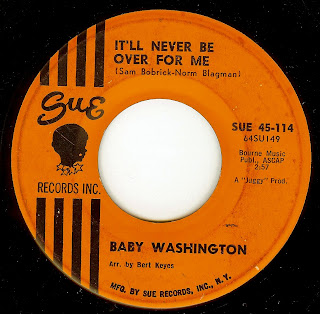 Baby Washington's early '60's records are some of my favorite Sunday soul sounds- perfect for slow movement, long contemplative spells of drinking coffee and generally keeping it soulful but mellow.

"It'll Never Be Over For Me" is one of  Baby's most heartfelt performances, and the song is a classic that has been recorded by dozens or artists, yet is far less known (at least outside of aficionados) than it should be. Juggy Murray's sparse production highlights the lonesome harmonica and is typically brilliant, proving that horns and strings aren't necessary for a soul record.

Justine continues to sing to this day, performing occasionally on the east coast. Sadly, she was working on tracks with producer Juggy Murray (of Sue Records fame) who was quoted as saying he would "rather record Baby Washington than eat" when Juggy died in 2005.

BABY WASHINGTON - IT'LL NEVER BE OVER FOR ME