DON COVAY - TAKE THIS HURT OFF ME 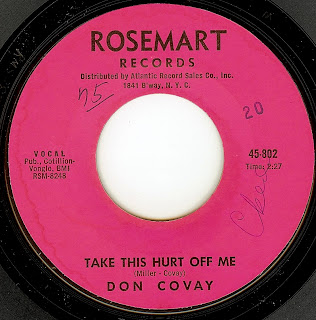 Don Covay wrote one of the most loved and famous songs in soul history ("Chain Of Fools") and co-wrote ANOTHER massive pair of tracks ("Mercy Mercy" and "Sookie Sookie"), featured a young Jimi Hendrix on guitar for Covay's recording of "Mercy", and also cut soul favorites such as "See-Saw" and today's excellent entry. Phew- what a resume!!!

Covay is a South Carolina native (who eventually called Washington DC his home as an adult) and his church upbringing (his father was a preacher) is obvious in his powerhouse vocal delivery. Beyond that, I'm struck by the poetic simplicity and directness of Covay's lyrics which make his writing and recordings so appealing; this is a trait heard in full effect on this recording. Whoever is behind the drum kit (most likely Bernard Purdie) provides one of the strongest backbeats and works his kick drum pedal so hard it's a small wonder that he made it through the take without busting through his drum head!

DON COVAY - TAKE THIS HURT OFF ME

On The Flip-Side said...

The Small Faces covered this right before Steve Marriott exited.