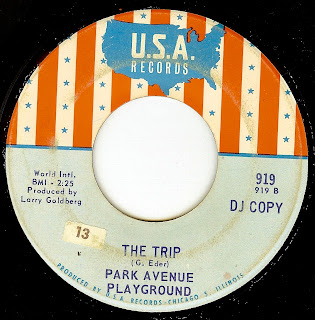 It was the spring of 1996 (April as a matter of fact); my band at the time had just released our first album  on Bomp! Records. The label sent us a great care package of releases, among which was the amazing compilation Beyond The Calico Wall. As I popped the disc in and hit PLAY, I was overwhelmed by some freaked out MAYHEM that lead into a song that immediately clawed its hooks into my brain. As I was grooving out to "The Trip", the singers voice sounded like an old friend; a voice I had heard countless times throughout my childhood. Turns out, the writer's credit was right there in the booklet, one G. Eder; an old friend indeed. It took a brief second but I realized it was a fella that I knew as George Michael (he took the name years before Wham!); not only did I know him, but my mom played in a BAND with him in the early-mid '80s and we all moved to California together at the end of '81!

I called George and, sure enough, we had a great conversation about this amazing record that he made when he was all of 17 years old, and I think it's safe to say that both of our minds were blown completely by this scene.

I immediately began a quest to find this record, and all roads led to a dead end. When I joined ebay a few years later, I started looking for a copy regularly and NOTHING would ever turn up! The first one I remember seeing was around eight years ago, and my heart just about stopped when I saw how the bidding progressed. If you've been reading this site, you know I don't give up, but the subsequent times that copies have turned up I kept getting outbid by mere pennies- I was READY to get this record, as I felt (rather arrogantly) that I was destined to own it! Here it is, 17 years later and I have a copy of my very own that I am very pleased to share today. George didn't write the flip side, but it's cool in it's own right- Beatle-esque and kinda freaky as well.

There's a great interview with George here, but there were some other questions I wanted to ask. George was kind enough to revisit this piece of his youth one more time...

Derek: You've known me since I was six! How do you think you would have reacted if, a voice from the future told you in 1981 that I would have been seeking out a record you made when you were a teenager?
George: Well, if I knew it was a voice from the future, I'd HAVE to believe it! I'd be a tad skeptical 'cause I did not think that the record had the stamina to last past the decade, especially the "B" side!


D: When I first heard this on the "beyond the calico wall" I got in touch with you. Were you aware of the cult status of the record before that?
G: My only clue might have been when some guy from New York had called me in '90 when I lived in Florida asking if he could use the 45 for some radio show he was doing locally in NYC. I told him he had the ok for the B side only. So when you told me I was on an album, I thought it may have been select recordings of whatever that show had broadcast.

D: Did you ever get to speak with Greg Shaw from Bomp Records?
G: I don't remember who it was I spoke to on that day I called the record company but they were fun and appreciative. They were stoked that the guy who wrote the opening song on their new release was aware of the recording. I told them that it was because of you Derek. They sent me a CD, cassette tape and vinyl album of BTCW.

D: I can't remember- did you play lead guitar or bass on this record?
G: I was on bass for this record. Our original bass player left town without telling anyone and we had gigs so we procured a Danelectro bass and a Fender Bassman amp quickly and played with that lineup for the next few years

D: Many teen bands of the time were writing about psychedelic experiences from an imagination standpoint. Had you (or the other members) had psychedelics at the time this was written?
G: We, as a band, had tripped a few times before we made this record so, the influence was apparent in our new songs. (I'll say! -ed)

D: Did the release of the 45 increase your status in the neighborhood?
G: For about 6 or 7 months, yeah. We did the local radio tour. We were in rotation on the wee hour playlists. We shared stages with quite a few local stars. It was a good time

D: What did the release of this record teach you and your young colleagues?
G:  Radio was the kingmaker. USA was a good label. The band imploded when band members parents would not sign off on their offspring touring. We never really regrouped. Personally, I learned which fans were also friends. I quit live music for a year after the breakup. I got serious with my guitar playing and emerged and a self-empowered, fully functioning axe slinger ready for anything. I left the region and never looked back. All the more surprising when you contacted me about "The Trip". That other me was so far removed from the me I had become, I was almost disdainful of the merit the recording had garnered. It seemed so dated as to be almost too amateurish to be good but, I'll admit, deep inside I was pleased knowing that people were enjoying the song even as inadequate as I deemed it to be.

D: What have you been up to musically since '67?
G: Well. as the saying goes, "I followed the music and the money around". I've performed in 15-16 bands all across the country in almost every genre but opera. I've contributed to hundreds of recordings and am still at it doing around 100 gigs a year with multiple bands here in the Pac NW. I can go on a cold gig with musicians I've never played with and improvise a 3-4 hour show. I consider myself a journeyman musician.

Took me awhile to figure out that you weren't talking about the guy from Wham :)

Great story Derek. I wish I could be a journeyman musician like him.

Me too! Great story though, great tunes and great post