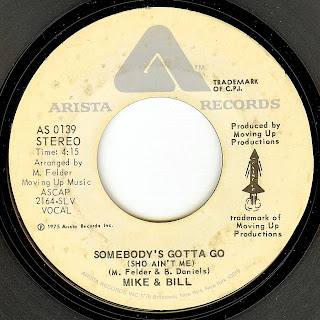 While the 70's soul scene didn't match the massive output of greatness as seen in the 60's (my opinion), there's a whole lot of great records from the decade, and yes, many of them could fall into the "disco" label.

I grew up in a "disco sucks" environment, but I never agreed. Of course like anything else, there's plenty of awful disco, but records like this (that were club favorites before disco went mainstream) are intense soul workouts that sound really great to my ears.

Mike & Bill were Michael Felder & William Daniels, and these fellas wrote, arranged, and produced this powerhouse track. The duo released a few more singles and an LP, but this debut had it ALL.