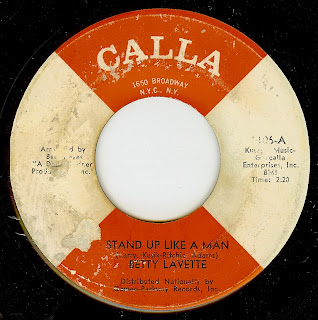 Betty Lavette's career, which began when she was 16 years old with the great record "My Man- He's A Lovin' Man", has now spanned 51 years. Betty sounds just as fabulous today as she did in the '60's!

Betty was born in the small town of Muskegon, MI, and grew up in Detroit, which is where she was discovered by Motown raconteur Johnnie Mae Matthews. By '65, she had reloacated to New York City, which is where this record (and other classics such as 'Let Me Down Easy") were cut.

This is one of her lesser known tracks, but it's full of her majestic vocal power (she's all of 19 years old here), and the song has some unusual chord changes, and the band swings so hard it HURTS.