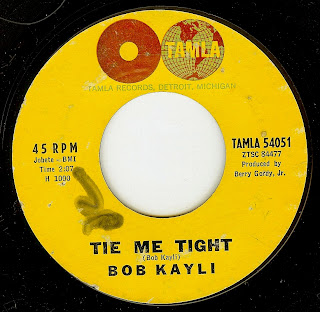 Bob Kayli is actually Robert Gordy, brother of Motown maven Berry Gordy. Just as Berry spread out the empire of Motown hits among four labels (Motown, Tamla, Gordy & Soul) to avoid radio stations feeling that they were playing too many Motown tracks, I would imagine that it was his idea for his borther to record under a pseudonym that didn't spell out nepotism.

This record has that perfect, dramatic (minor key), uptempo thing that was so common in r&b for just a few short years (and has gone on to massive popularity in the Belgian "Popcorn" scene). Bob turns in a fabulous vocal, and the female backing vocals are superb as well. The song is catchy, and, if it wasn't for the sadomasochistic lean to the lyrics probably could have been a big hit. Pretty risque stuff for 1962!

"Bob Kayli" released just a small handful of records, and eventually showed up in the film Lady Sings The Blues in the 1970's.