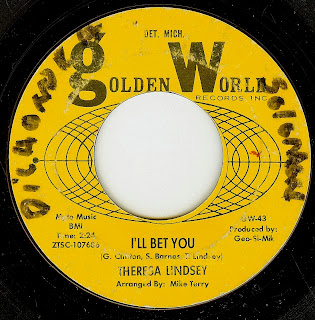 Theresa Lindsey's superb 'I'll Bet You" was one of George Clinton's incredible mid-60's songs that he co-wrote/ produced in the Detroit soul scene. Theresa, who turned down a contract with Motown to work with Golden World, already had scored a small hit in 1963 with "Gotta Find A Way", and also sang backups on Wilson Pickett's "If You Need Me". She turns in a superb performance here, and to my ears it's the beginning of the freakier, psychedelicized vision of Mr. Clinton. The song is full of amazing creative wordplay, and some stellar guitar work from Dennis Coffey. This track was so good it saw versions from Billy Butler, Jean Carter, The Jackson Five, and Funkadelic (on their first album).

Sadly, Theresa Lindsey released only four 45's. This was the final one.