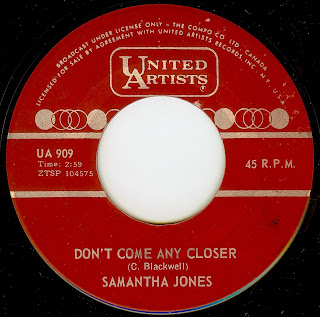 Samantha Jones (real name Jean Owen) is a Liverpool, UK native who, as part of The Vernon Girls, cut one of the earliest (and best) Beatles tribute records, "We Love You Beatles" in early '64.

Producer Charles Blackwell recognized Jones/Jean's talent early on, and began producing her as a solo artist later that same year.

Even though her records were released worldwide, well written and beautifully produced,they never achieved the hit status they deserved. "Don't Come Any Closer" brilliantly presents the theme of the lyrics in a dramatic arrangement that is probably Jones' ultimate statement.

Love this song - it's made it's way onto my latest playlist.