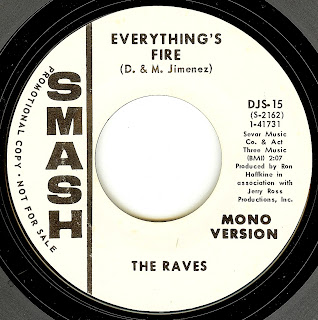 The Raves were from the New York City area (I think) and released three 45's for Smash between '67-'68, of which this is the final one. The records failed commercially and the group faded into obscurity.

This record is a fantastic example of how heavier sounds began to infiltrate mod/ beat records and the group concocts a real hot side indeed! The song gets weirder and trippier until (at 1:17) everything reigns in for a dynamic and TIGHT ending.

really cool! i wonder what/how Mercury/Smash gotta hold of these guys and who the heck were they? Nifty, thanks!