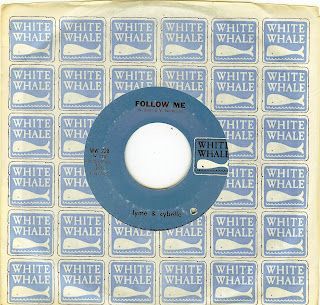 Pop music was changing so rapidly (and so dramatically) during 1965-67 that certain song traits tend to fit a particular era; on first listen, "Follow Me" shouts out 1967, as the dominant drone of the guitar riff and the vocal melody points to the era after the Beatles unleashed Revolver upon the world in the summer of '66. Basically, the type of elements that most agree are "psychedelic". Nope, this single was released in April, 1966.

Los Angeles based duo lyme & cybelle didn't contain a Lyme or a Cybelle among them, as the female voice belongs to Violet Santangelo (who later went on to Broadway success as "Laura Kenyon"), and the male voice is none other than Warren Zevon (making his recorded debut here)! The duo also wrote both sides of the single, and undoubtedly reaped some hefty songwriting royalties when the gorgeous "Like The Seasons" was issued as a b-side to The Turtles massive smash #1 hit "Happy Together".

"Follow Me" conjures up the mental images of Los Angeles in the spring of '66 where the possibilities of creativity were endless, days were spent in the sunshine, nights dancing and swaying to tracks with this particular brand of L.A groove at Bido Lido's or The Trip, and intellectual 3AM conversations at Ben Frank's were all part of the scene that was set.

"Like The Seasons" is delicate and gorgeous, and shows off Zevon's songwriting talents and is a fascinating peak into a future superstar, and the harmonies are spellbinding.

What a great record.

Thank you for the early Warren Zevon, quite a difference from later work. Always enjoy your postings, thanks again!